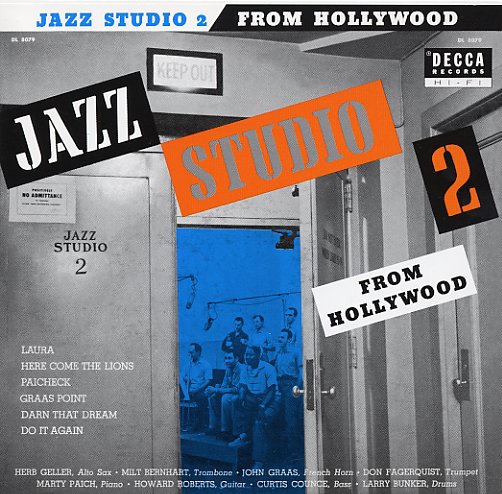 Easily one of our favorite of the Jazz Studio series on Decca – and despite the "from Hollywood" in the title, a great set of serious jazz! Geller works with a group that includes Milt Bernhardt on trombone, John Graas on French horn, Don Fagerquist on trumpet, Marty Paich on piano, and Howard Roberts on guitar – supported by the team of Curtis Counce on bass and Larry Bunker on drums. The overall approach is tight, but with lean and mean solos – similar to work by these players on labels like Mode or Nocturne at the time. Tracks are longish, and titles include "Do It Again", "Graas Point", "Laura", "Here Come The Lions", and "Paicheck".  © 1996-2022, Dusty Groove, Inc.
(Black label pressing with deep groove – nice and clean! Cover has light wear, and a bit of seam splitting.)

Herb Geller Sextette (Trip pressing)
EmArcy/Trip, 1955. Near Mint-
LP...$4.99
Classic early work by Herb Geller – and a record that features his crispy alto against a group that features wife Lorraine Geller on piano, Conte Candoli on trumpet, and Zoot Sims on tenor (playing here under the name Ziggy Vines!) The tracks are short, with a lot of west coast whimsy – ... LP, Vinyl record album

Gene Norman Presents The Charlie Ventura Septet – In Concert 1949
Decca/MCA, 1949. Near Mint-
LP...$3.99
From bop to swing – and everything in between! A classic performance by Charlie Ventura – recorded in Pasadena in 1949, with his septet that included Benny Green on trombone, Boots Mussuli on alto, and vocalese bits by Jackie & Roy! Ventura was a key link in two jazz traditions of ... LP, Vinyl record album

Jazz-Lab 2
Decca, 1955. Very Good-
LP...$9.99
A classic session from the second wave of LA cool jazz of the 50s – headed up by French horn player John Graas, a player as important to his instrument as Gerry Mulligan was to the baritone sax! Like Mulligan, Graas was working with an instrument that you might normally think of as clunky ... LP, Vinyl record album

Holiday For Jazz
Decca, 1955. Very Good+
LP...$9.99
One of the rare few albums cut by 50s tenor star Joe Holiday – and a gem of a session that has him fronting a larger group, blowing lean well-cut solos on a number of very hip original tunes! The group's a large one, but the sound's still quite tight and swinging – a great follow-up to ... LP, Vinyl record album

I Play As I Please
Decca/Eclipse (UK), 1957. Very Good+
LP...$14.99
Includes recordings with a thirteen-piece combo led by Don Rendell and featuring Jimmy Skidmore; with Lyttleton's Paseo Band; and in a smaller group with Johnny Picard on trombone, Kathleen Stobart on tenor, Tony Coe on alto, Ian Armit on piano, Brian Brocklehurst on bass, and Eddie Taylor on ... LP, Vinyl record album

College Goes To Jazz
Decca, 1956. Very Good+
LP...$13.99
A hipper group than you'd expect – especially since they're all college kids! John Graas found these guys playing at Westlake College, and he rightly thought they had a sound that was well worth recording for Decca – not surprising, since these guys have a similar chamber modern groove ... LP, Vinyl record album