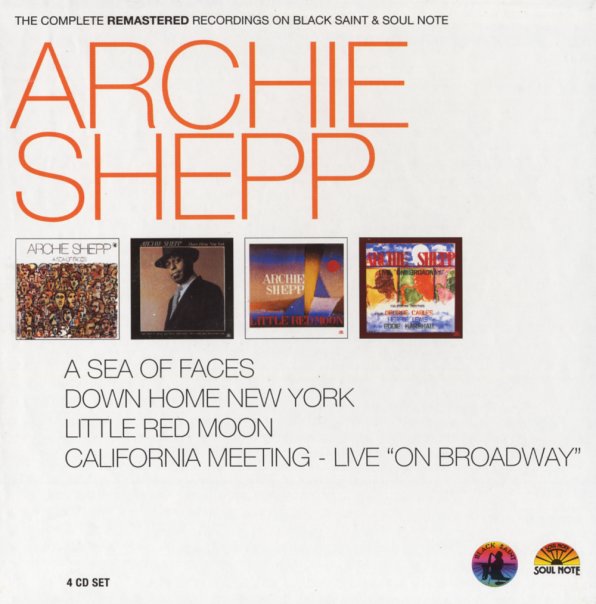 A relatively small slice of the long and storied career of tenorist Archie Shepp – but a great one too, and a set of records that marks some of Shepp's more spiritual modes at the time! The package might well be worth it alone for the classic Sea Of Faces – a great little set from Archie Shepp – one of his strongest of the 70s, and a real return to the kind of spiritual jamming he was doing at the end of his time with Impulse Records! The album's well-known for it's great track "Song For Mozambique" – a spare and righteous number that features Bunny Fox singing in a sweet spiritual mode, while Charles Greenlee and Shepp recite chants over the jamming grooves of the band. Fox also sings on the mellow and soulful "I Know Bout The Life", and the Shepp group picks up a straight but hard mode on Cal Massey's great track "Lookin For Someone To Love". The extended jammer "Hipnosis" takes up all of side one – and it's a great little groover that builds nicely with a comping rhythm, yet which gives the band some nice room to solo in an exploratory fashion. Down Home New York is an overlooked killer from Archie Shepp – a set that almost recalls some of the spiritual moments of his later Impulse work, and which definitely has him moving past some of the straighter sounds of this period in his career! Things are never too outside or free, but there's a balance with straightness that's really great – so that when the rhythms are gentle, Archie might really take off in an edgey solo – or when the grooves have more force, he might hang inside with a soulful core energy, holding the whole group together. There's some great use of electric bass on the date – played by Saheb Sarbib – and other players include Charles McGhee on trumpet, Ken Warner on piano, and Marvin Smitty Smith on drums. Players vocalize a bit at times – in an older Shepp way – and titles include "Down Home New York", "May 16th", "Down Home New York", "Straight Street", and "The 4th World". Little Red Moon features some nicely spiritual currents too – with a group that includes Enrico Rava on trumpet – on titles that include "Naima", "Impromptu", "Whisper Not", and "Little Red Moon". California Meeting is a live set from the west coast – featuring some very long tracks with George Cables on piano, Herbie Lewis on bass, and Eddie Marshall on drums – plus bluesman Royal Blue on one track too. All four albums come in a box, in tiny recor-style sleeves!  © 1996-2021, Dusty Groove, Inc.