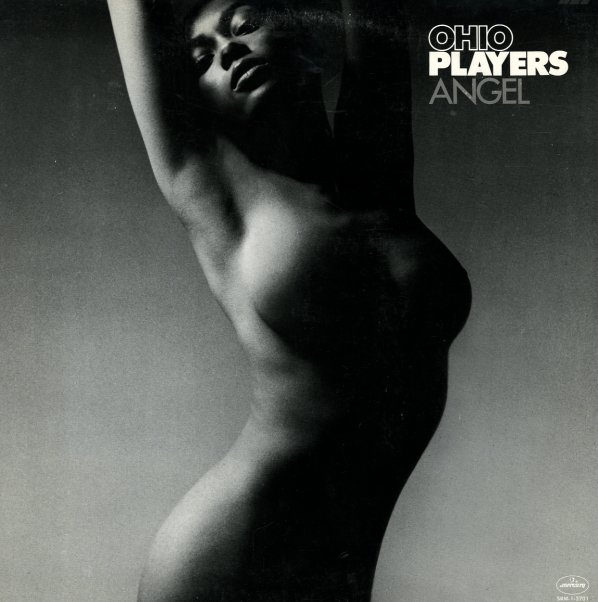 Maybe the last great album in the Ohio Players run for Mercury in the mid 70s – a set that's every bit as smooth, sexy, and funky as their other major label efforts from the time – and one that continued to refine the grittier funk of their roots! While the Players might be remembered for their over the top jams, the cuts here we love the best are the mellower steppers – tracks that still have plenty of funk in the mix, but hit a gentler groove, too – following the spacey soul legacy of "Sweet Sticky Thing". Titles on the album include "Glad To Know You're Mine", "Angel", "Merry-Go-Round", "Don't Fight My Love", "Body Vibes" and "Ohio".  © 1996-2022, Dusty Groove, Inc.
(Includes the heavy inner sleeve. Cover has some ring and edge wear, light scrapes, and is bent a bit at the sides.)

Mr Mean
Mercury, 1977. Very Good+ Gatefold
LP...$11.99
A lesser-known 70s album by The Ohio Players – tunes recorded for the soundtrack of the late blacksploitation film Mr Mean, but also very much in the tight funk format of the group's Mercury work! Tracks are nice and long overall – almost in a stretched-out take on the soundtrack mode, ... LP, Vinyl record album

Ecstasy
Westbound, 1973. Very Good+ Gatefold
LP...$39.99
Fuzzy funk from some of the all-time greats – one of the key Westbound Records classics from the mighty Ohio Players! This album's got the Players working at their all-time best – a bit jazzy, with a more sophisticated undercurrent than some of their contemporaries – a righteous ... LP, Vinyl record album

Fire
Mercury, 1975. Very Good- Gatefold
LP...$11.99
One of the biggest albums ever for Ohio Players – a set that took their earlier funk sound and targeted firmly at the mainstream with a lean, mean groove that a million other groups copied at the time! There's still plenty of the soul of the early years in the group's approach here – ... LP, Vinyl record album

Ohio Players Greatest Hits
Westbound, Early 70s. Very Good+ Gatefold
LP...$19.99
A fantastic overview of the early years of the Ohio Players on Westbound Records – material that's a lot trippier than their late 70s hits, and which has the group maybe closer to Funkadelic at times than you might expect! Given that the Players here are right out of their earliest psych ... LP, Vinyl record album

Skin Tight
Mercury, 1974. Very Good+ Gatefold
LP...$19.99
Great work from the Ohio Players – and proof that moving to a big label could be a good thing for a funky group! This was the band's first album for Mercury – and although one might have the temptation to say that the label cut down the radical funk sound of the trippy Westbound years, ... LP, Vinyl record album

Good Black Is Hard To Crack
Mercury, 1981. Near Mint-
LP...$6.99
Esther's swan song for Mercury, featuring tunes in a number of modes. Material ranges from a laid back early 80s soul reading of "Crazy", to more stripped down clubby soul on par with the previous album, to more stripped down modern groovers. Produced by Benny Golson. Other titles ... LP, Vinyl record album

Spice Of Life
Mercury, 1972. Very Good+ 2LP Gatefold
LP...$13.99
Perhaps the greatest record Jerry Butler made in the 70s, and a very tight bit of baroque Chicago soul with arrangements and production by Samuel F. Brown III. The tracks are a good mix of originals and covers, and they all show Jerry going way past his Gamble & Huff/Mercury years – into ... LP, Vinyl record album

Them Changes
Mercury, 1970. Very Good- Gatefold
LP...$14.99
A landmark crossover album – featuring Buddy Miles' mixed Freedom Express group, and a heavy jazz-rock sound that would soon dominate the charts with other groups. Buddy's drums are super-heavy, even if his vocals always get us the wrong way. Includes the original recording of "Them ... LP, Vinyl record album

Electric Lady
Mercury, 1985. Very Good
LP...$6.99
A relatively beat-heavy set from Con Funk Shun – one that has them moving into some of the same spaces as their ensemble funk contemporaries, and using a bit more programmed rhythms than before! Given their pedigree with grooves, the group still manages to keep things soulful – and the ... LP, Vinyl record album