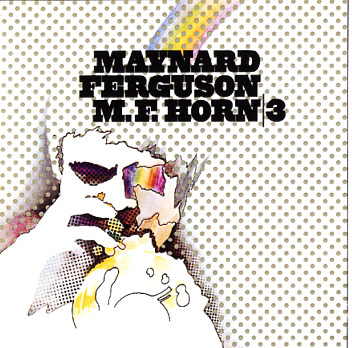 Funky funky Maynard – and a sweet set of electric big band jazz that's got plenty of nice moments! The album features a core rhythm group that really goes to town – jamming in sort of a Clarke-Boland sort of way, with lots of propulsive changes that create a full-on and often funky groove – as Maynard and other horns blow like mad over the top, sending the album into screaming, soaring grooves that almost never let up. The record was Maynard's first US effort in a long time – and was produced by Teo Macero with a very electric-conscious sound that further enforced the hipness of the music! Titles include "Pochahontas", "Awright Awright", "Nice N Juicy", "SOMF", and "Mother Fingers".  © 1996-2021, Dusty Groove, Inc.

MF Horn 4 & 5 – Live At Jimmys
Columbia, 1974. Very Good 2LP Gatefold
LP...$1.99
A sweet double-length set from Maynard – one that's live and totally cooking, and proof that Ferguson's funky big band style could work equally well in a concert setting! As on other Ferguson classics from the time, the instrumentation includes a good deal of Fender bass and electric piano ... LP, Vinyl record album

Maynard Ferguson Octet
EmArcy, 1955. Very Good-
LP...$5.99
Maynard Ferguson's blowing full steam ahead here – working with an octet that's heavy on horn parts, but in a richly creative way! Ferguson nicely shows off some of his best influences from the 50s large group scene in LA – and gets some key help on the record from Bill Holman, who ... LP, Vinyl record album