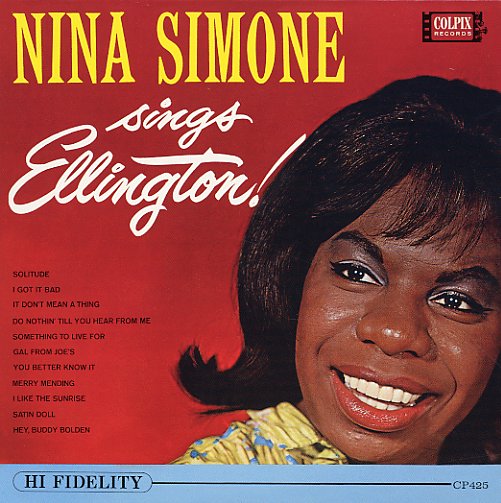 Nina sings Ellington – but as always, she makes whatever she sings all her own! The album's a bit straighter than later efforts – with large backings by Stu Phillips that also feature vocals by the Malcolm Dodds Singers – but Nina also conceived the whole thing herself, as an effort to bring a new level of spiritualism to Ellington's work. The result is a masterpiece – proof that even in her early years, Nina could completely transform anything she laid her hands on – and unlock a soulful depth that even the original recordings might have missed. Titles include "I Got It Bad", "Solitude", "The Gal From Joe's", "It Don't Mean A Thing", and "I Like The Sunrise".  © 1996-2022, Dusty Groove, Inc.
(Mono gold label pressing. Cover has some ring and edge wear, small splits in the bottom seam, and a large inspection stamp in back.)

Nina Simone Sings Billie Holiday – Lady Sings The Blues
Stroud, 1972. Near Mint-
LP...$39.99
A rare one from Nina Simone – a set that was issued during her years on RCA, but on the smaller Stroud label – run by husband Andy Stroud! The set's what you'd guess from the title – a tribute to Billie Holiday, but one that's way more than just a copycat of Lady Day's mode ... LP, Vinyl record album