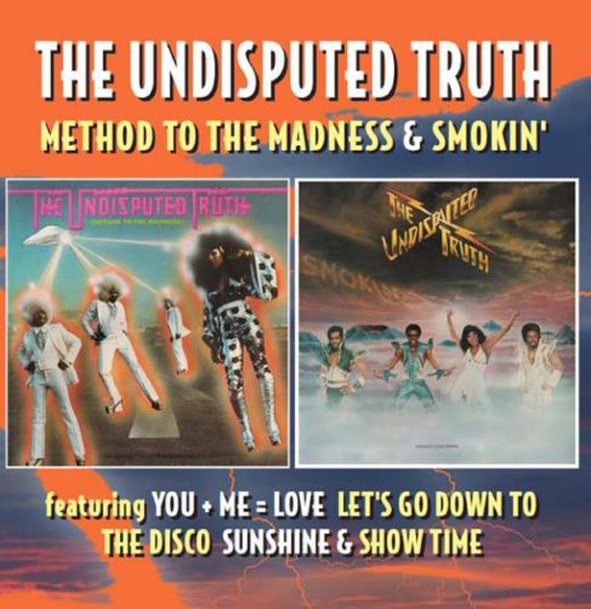 Method To The Madness/Smokin'

A pair of classic albums from The Undisputed Truth! First up is Method To The Madness – a gem from the second chapter of the group – that time when they stepped away from Motown, and followed producer/creator Norman Whitfield to his own label in California! The shift of record companies also marks a cool shift in styles too – an approach that still has all the bold, bassy elements you'd know from the earlier hits – but one that also has some fuller, more cosmic elements too! The set begins with a weird electronic spoken number that's almost experimental – then brings up the bass for a bit of heavy funk, while also using electric elements in a way that really points the way to sounds that other big funk groups would cop at the start of the 80s – but which really sound fresh here. Titles include "Sunshine", "Take A Vacation From Life (And Visit Your Dreams)", "Life Ain't So Easy", "You + Me = Love", "Cosmic Contact", "Hole In The Wall", and "Let's Go Down To The Disco". Smokin has them still going strong with Whitfield, in a groove that's every bit as wonderful as their early years! There's a killer mix of funk and deeper soul here that few other acts could handle this well – a way of hitting the flashy funk of Sly & The Family Stone or Graham Central Station – but also not falling into any showbiz traps, either – in a mode that really his the group not only respecting the role of each member, but also working together in a very cohesive way on the album. The result is a great little set that balances funky grooves with some excellent cosmic soul cuts – supported by great session work from giants like Wah Wah Watson, Walt Downing, and Jack Ashford. Titles include "Show Time", "Space Machine", "I Can't Get Enough Of Your Love", "Misunderstood", "Sandman", "Atomic Funk", and "Talkin To The Wind".  © 1996-2022, Dusty Groove, Inc.