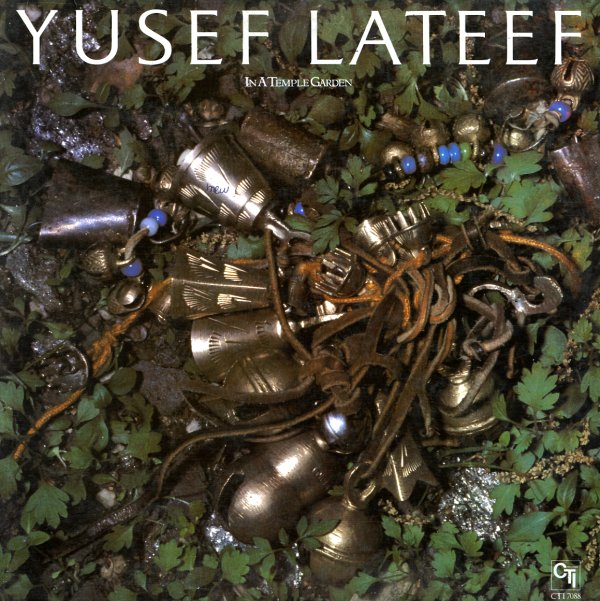 In A Temple Garden

An obscure one for Yusef Lateef – and proof that the reedman was always open to new ideas at every single point in his career! Lateef had already recorded for the CTI label on a few great previous albums – but this album is quite late in his run for the label, and has a slightly different vibe – maybe a bit smooth at points, but also plenty darn soulful too! The overall format is in the vein of a lot of CTI sides from this time – larger group and larger arrangements, handled by Jeremy Wall, with enough space for Yusef to dominate the record with his solos on tenor and flute – blowing openly and soulfully, with a nice straight ahead vibe. The tunes aren't as exotic as the title might imply, but they do hit some really nice moments that seem to breathe new life into Lateef's career – and set the stage for a lot of his 80s recordings to come. Titles include "Nayaz", "Jeremiah", "Morocco", "In A Temple Garden", and "Bismillah".  © 1996-2022, Dusty Groove, Inc.
(With CTI inner sleeve.)

Yusef Lateef (aka Lost In Sound)
Charlie Parker/Everest, 1961. Sealed
LP...$16.99
Yusef Lateef's one and only album for the Charlie Parker label – cut during a period when he's been making real waves in the jazz scene with work on Prestige and Savoy! The set's a bit more straight ahead than some of Lateef's more exotic sides of the time – focusing on his work on ... LP, Vinyl record album

Prelude
CTI, 1973. Very Good+ Gatefold
LP...$16.99
A legendary album from the 70s funk scene – and one of the crowning achievements of keyboard maestro Eumir Deodato! Deodato got his start during the bossa years of the 60s – where his sophisticated charts were already enough to make his career a landmark – but in the following ... LP, Vinyl record album