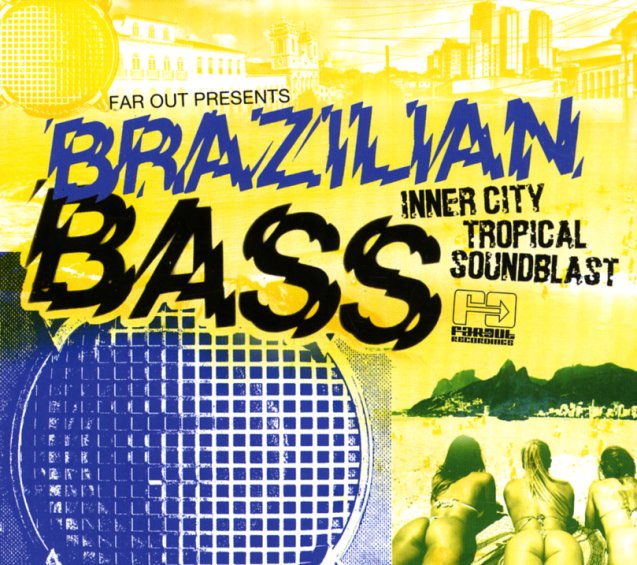 A very hip set that goes way beyond the stock bass-heavy grooves that have been showing up on other Brazilian compilations in recent years – and a package that really does a great job of reintroducing roots to contemporary urban music in Brazil! The album offers up a Brazilian take on the heavy sound of the bass – served up here in ways that echo famous modes in hip hop, reggae, and Afro Beat – but all with a uniquely Brazilian twist as well Tracks feature a range of contemporary artists who are taking grooves past the heavy, bombastic sound of the favelas – refining things a bit more up top, while still holding onto the powerful presence of the bottom – through a range of instrumentation that includes both acoustic and electric touches, and some key nods to older Brazilian styles as well! There's a sophistication here that goes way past any booty-shaking cliches – and, quite frankly, beyond the cover art too! Titles include "Olhe O Fogo" by Os Nelsons, "Pequi Week Bar" by Sistema Criolina, "Caroco" by Nsista, "Eu Acho E Pouco" by Soraia Drummond, "Travessias" by Anton Dub, "Nao Deixe De Lutar" by Junior Dread, and "Te Amarrado (Mangaio rmx)" by O Quadro.  © 1996-2023, Dusty Groove, Inc.

Encore
Far Out (UK), 2007. Used
CD...$6.99
Tremendous new work from Arthur Verocai – the Brazilian legend who's best remembered for his sublime self-titled album from the 70s, but who sounds equally great on this contemporary release! The record has a really classic feel overall – warm, soulful, and filled with plenty of jazzy ... CD

New Morning (deluxe edition)
Far Out (UK), 2008. Used
CD...$12.99
A nicely changed-up version of this sweet Brazilian-tinged set! Sabrina Malheiros just keeps on getting better and better – and she really sparkles wonderfully here in a set of fully soulful backings! The album's put together by Daniel Maunick, aka Venom, and son of Bluey from Incognito ... CD

Wave
Far Out (UK), 2009. Used
CD...$9.99
Beautiful grooves from Alex Malheiros – best known for his bass work in Azymuth, but stepping out here in a warm and wonderful set of his own! The groove here really takes us back to the sunny, soulful fusion we first loved when Azymuth hit the scene in the 70s – and Malheiros' ... CD

Nova Bossa Nova
Natasha Imports/Far Out (Brazil), 1998. Used
CD...$4.99
The first album by Marcos Valle after years and years away from the studio – a set that really reintroduced his talents to a whole new generation! The set was recorded for the Far Out label in London – a then-new imprint who were doing a great job to bring back a Brazilian groove that ... CD

Doris Monteiro
Todamerica/Inter CD (Brazil), 1950s. Used
CD...$11.99
Beautiful early work from Doris Monteiro – a great little set that brings together a range of material originally issued as 78rpm recordings – relatively obscure sounds from the years before she became one of the first interpreters of the music of Jobim! Titles include "Cedo Para ... CD