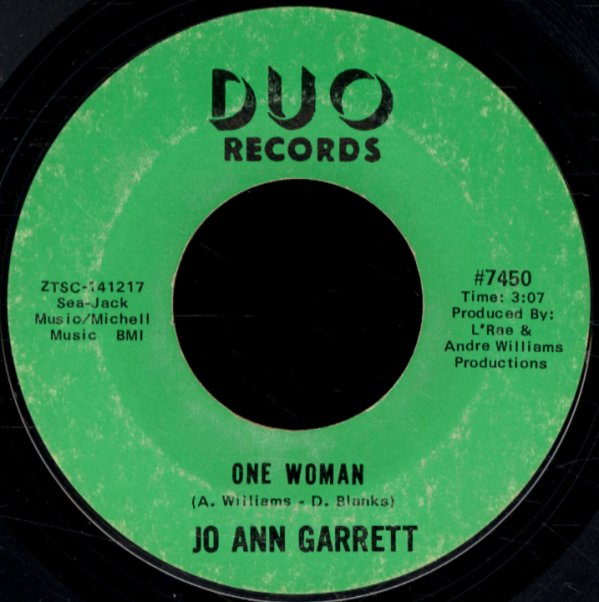 2 rare sides by Jo Ann Garrett – recorded after her album on Chess, with production by Andre Williams! "One Woman" is a sweet, sad ballad – pretty nice, but the real treat here is "Now Girl"! That tune's got a snapping little groove – just a touch of funk coming into play with Chicago soul, loping over the top like the best cuts on Jo Ann's classic LP!  © 1996-2022, Dusty Groove, Inc.

Love At First Sight (Je T'aime . . . Moi Non Plus)/Nancy's Song
A/S, Early 70s. Near Mint-
7-inch...$14.99
One of the stranger covers of Serge Gainsbourg's big hit! Bebe Barron helps out the group with "special sound effects". We're not sure if they mean the nice marimba-like instrumentation on the cut, or the female orgasm that comes in near the end – but whatever the case, the track's ... 7-inch, Vinyl record

If I Could/Why Must It Be
Star Vue, Early 70s. Near Mint-
7-inch...$16.99
Fantastic lost soul from Chicago! "If I Could" has these amazing baroque arrangements, with a good string part, and a hard groove buried deep in the mix. The lead vocals are by a very soulful female singer, and she really carries the track over nicely, with an honesty that's fairly ... 7-inch, Vinyl record