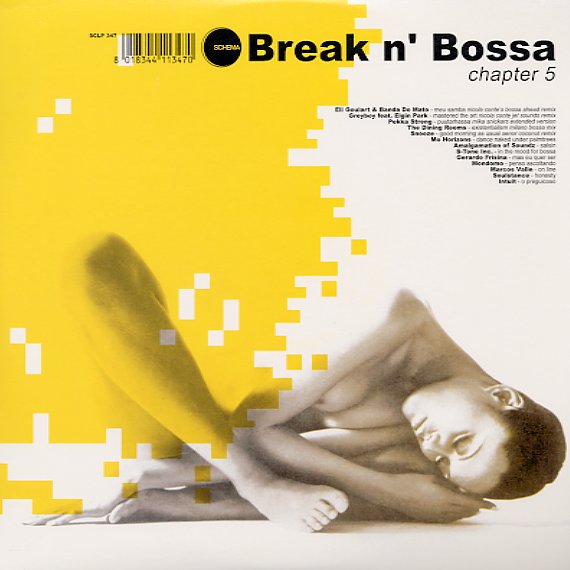 The 5th volume in this great series is bigger than ever! Back when volume 1 first came out, the idea of modern bossa dancefloor tunes was a strange concept – now, thanks to the work of the Schema crew, in releases like this one, the groove is here to stay – and strongly! The set offers a 13 track overview of the best of recent years – mostly groups from Europe, and all firmly in the Schema Records style. Most tunes are remixed versions, and titles include "Mastered The Art (Jet Sounds rmx)" by Greyboy, "On Line" by Marcos Valle, "O Preguicoso" by Intuit, "Salsin" by Amalgamation Of Soundz, "Penso Ascoltando" by Mondomo, "Meu Samba (Nicola Conte's bossa ahead rmx)" by Eli Goulart & Banda Do Mato, "Puutarhassa (Milk Snickars ext version)" by Pekka Streng, "Good Morning As Usual (Senor Coconut rmx)" by Snooze, "Existentialism (Milano bossa mix)" by The Dining Rooms, "In The Mood For Bossa (alt)" by S-Tone Inc, "Dance Naked Under Palmtrees" by Mo Horizons, and "Honesty" by Soulstance. Plus, the CD version also features a bonus disc – with all 13 tunes mixed live by Luciano Cantone!  © 1996-2021, Dusty Groove, Inc.
(Out of print.)

Versioni Particolari 2
Schema (Italy), 2006. Used
CD...$4.99
A full length, CD-only package that brings together material scattered over 4 different 12" singles from The Dining Rooms – remixes that sprung up in the wake of their excellent Experiments In Ambient Soul album, handled by a range of talents who really expand the grooves! Many of the ... CD

Brazilika!! – A Special Brazilian DJ Mix From Kenny Dope
Far Out (UK), 2004. Used
CD...$4.99
From Rio to London to New York – a wonderful mix of tunes from the mighty Far Out label, put together by Kenny Dope in honor of their 10th anniversary! Kenny's ear for the work really opens these grooves up a lot for us – and helps reintroduce us to tunes that we though we already knew ... CD