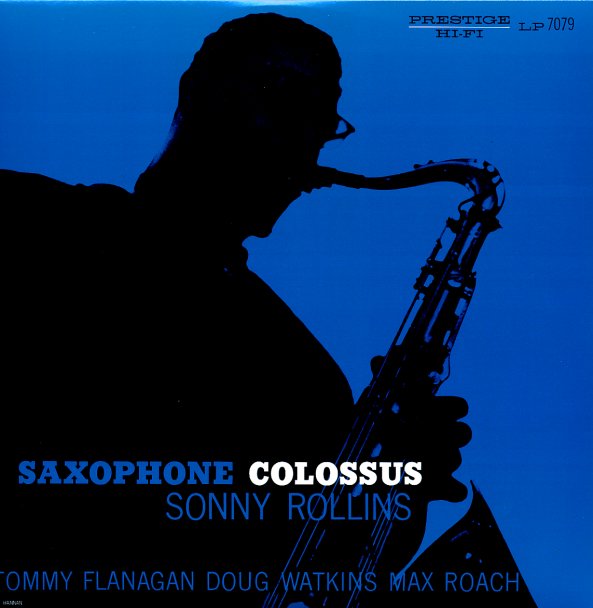 Quite possibly THE greatest Sonny Rollins album of the early years – or at least the one that has received the most accolades over the years! The record is a brilliant batch of quartet tracks that reinvents bop through Sonny's complicated, yet seemingly automatic solos – an excellent showcase for his razor-sharp talents for improvisation and invention, played with effortless ease, yet still one of the great bar-setting performances of 50s jazz. The group features Tommy Flanagan, Max Roach, and Doug Watkins – and tunes include an original reading of the perennial Rollins' standard "St. Thomas", plus a great version of "Moritat (Mack The Knife)", and the cuts "Strode Rode" and "Blue 7".  © 1996-2022, Dusty Groove, Inc.
(Out of print.)

Sonny Rollins In Japan (Japanese pressing)
Victor (Japan), 1973. Used
CD...$19.99
One of Sonny Rollins' best albums of the 70s – a Japanese-only live date that features some excellent work on both tenor and soprano sax! The group has a really great feel – thanks to congas by Mtume and guitar from Yoshiaki Masuo – both of whom bring some new elements to Rollins' ... CD

Bridge
RCA/Masters Of Jazz, 1962. Used
CD...$2.99
A landmark album from Sonny Rollins – one that marked his comeback in the early 60s, after a brief period of retirement, and which also initiated a string of incredible recordings with guitarist Jim Hall. Given Hall's gentleness and spare modernity on the guitar, a fan of Rollins' hard-blowin ... CD

Sonny Rollins With The Modern Jazz Quartet (20 bit remaster)
Prestige, 1951/1953. Used
CD...$6.99
Early Sonny Rollins work for Prestige – recorded in the years 1951 and 1953, in a variety of settings! 4 tracks on the album features Rollins blowing with the MJQ, one more has him working with a Miles Davis group, and the last 8 feature a quartet with Kenny Drew, Percy Heath, and Art Blakey. ... CD

Sonny Rollins Vol 1 (Blue Note 1542) (non-RVG Edition)
Blue Note, 1956. Used
CD...$3.99
Amazing early work from Sonny Rollins – the first of his tremendous Blue Note albums – and a record that really shows him taking off at the time! The record captures Rollins at a key turning point – emerging from his firey bop years, moving into a much more complicated, ... CD

Quartets Featuring Jim Hall
RCA/Bluebird, 1962. Used
CD...$4.99
A double album collecting Newk's excellent quartet recordings with Jim Hall for RCA. As such it contains work from The Bridge and What's New?, plus a few numbers that got tacked onto the Standard Sonny Rollins. Given Hall's gentleness and spare modernity on the guitar, a fan of Rollins' hard-blowi ... CD

Sonny Rollins Plus 4 (RVG remaster edition)
Prestige, 1956. Used
CD...$6.99
A crackling bit of hardbop from Sonny Rollins – and a session that has Sonny playing with the Max Roach/Clifford Brown group that included Bud Powell's brother Richie on piano! Sonny had already made a strong name for himself on albums issued under the Roach/Brown tag at the time, and here ... CD

Monterey Concerts (Concert By The Sea Vols 1 & 2)
Prestige, 1959. Used
CD...$7.99
The crashing waves of the Pacific coast hardly seem like the serene setting you might want for the vibes of Cal Tjader – but this album works surprisingly well, and offers up Cal's combo in a Monterey live date, before the jazz festival really got going strong! The group's one that matches ... CD