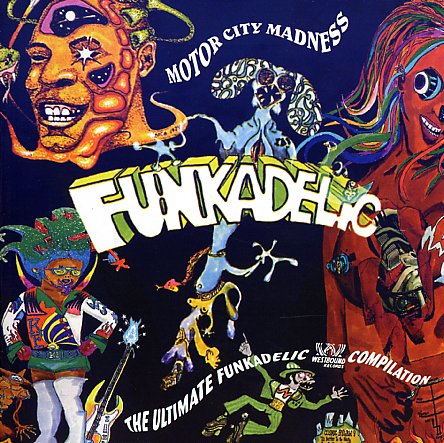 They certainly got the title right on this one – because it definitely is the ultimate collection of Funkadelic goodies! The 2CD set pulls together 29 tracks from the group's classic years at Westbound – and shows them starting out as a messed-up, guitar-growling rock funk act – filled with the unique crossover spirit of Detroit – then turning into a tighter, funkier soul act with the power to really rock the charts! All the good funky tunes are here – and the set seems to have a special focus on tracks by the group that have been sampled strongly in recent history! Titles include "Red Hot Mama", "Funky Dollar Bill", "Hit It & Quit It", "Cosmic Slop", "Loose Booty", "Get Off Your Ass & Jam", "America Eats Its Young", "Maggot Brain", "I'll Stay", "Nappy Dugout", "I'll Bet You", "I Got A Thing You Got A Thing Everybody's Got A Thing", "A Joyful Process", "Be My Beach", "Undisco Kidd", "Biological Speculation", "Take Your Dead Ass Home", and "You Can't Miss What You Can't Measure".  © 1996-2022, Dusty Groove, Inc.

Standing On The Verge – The Best Of Funkadelic
Westbound, 1970s. New Copy
CD...$9.99 18.99 (LP...$18.99)
A heavy best-of from Funkadelic – one that covers the full range of their classic sounds – from the trippy fuzz of the early days to the tighter funk of stardom years! The package has a power that's undeniable – a really massive batch of music that forever changed the face of ... CD