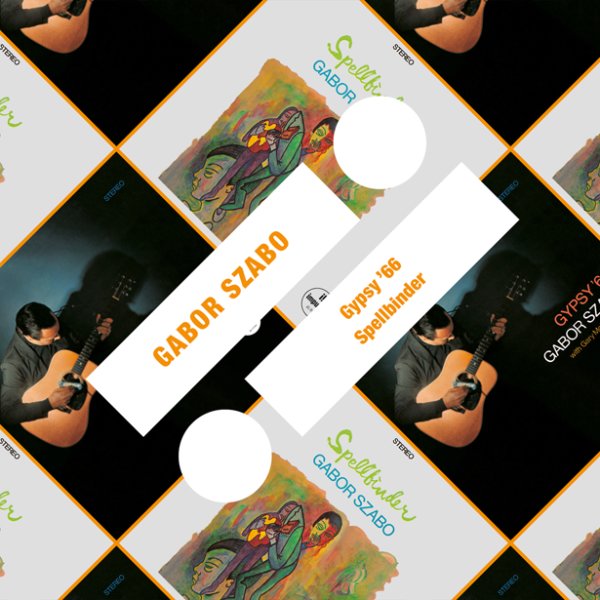 Two very groovy records – back to back on a single CD! Gypsy 66 is one of Gabor Szabo's best records – a hip small combo session, featuring backup by Gary McFarland, Sadao Watanabe, Richard Davis, and Willie Rodriguez – an odd kind of lineup, but one that goes well with the offbeat grooves of the set! The overall sound has lots of touches of the McFarland Latinized rhythms of the time – but also stretches out with some of those great snakey guitar solos from Szabo – not nearly as extended or trippy here on other albums of the time, but in a really great way that makes for some tight, hip, mod little tracks! The set's one of Gabor's best from the 60s – and titles include "Flea Market", "Walk On By", "Gypsy Jam", "Gypsy '66", and "The Echo Of Love". The whole thing's kind of a compressed take on the sound of Gabor's Spellbinder album – if you know that one! Spellbinder is breezy brilliance from the legendary Gabor Szabo – and one of the grooviest albums the Hungarian guitarist recorded during the 60s! The set's almost a tightening up of the style that Szabo first brought to prominence in his work with Chico Hamilton – a sound that's got roots in gypsy guitar, but which is also influenced by modern, Latin, and soulful styles of the 60s. There's an airiness to Gabor's guitar that's almost trippy – but which never goes too far out on the set, and really keeps a focus on the backings laid down by the album's highly rhythmic combo of Chico Hamilton, Ron Carter, Victor Pantoja, and Willie Bobo. Szabo makes a surprisingly great vocal appearance on 2 tracks – "Bang Bang" and "Autumn Leaves" – both sung in this weirdly dark style that's a great contrast to the lightness of his work on guitar. Other titles include Gabor's hit "Spellbinder", plus "Gypsy Queen", "It Was A Very Good Year", "Yearning", and "Cheetah".  © 1996-2021, Dusty Groove, Inc.

Astro Black
Impulse/Modern Harmonic, 1973. New Copy
CD...$14.99 15.99 (LP...$24.99)
One of the darkest Sun Ra albums of the early 70s – and a set that's also a bit unusual in his catalog as well! The album was issued during Ra's run with Impulse Records – a period that mostly saw the label reissue previous records from the Saturn catalog – save for a rare few ... CD