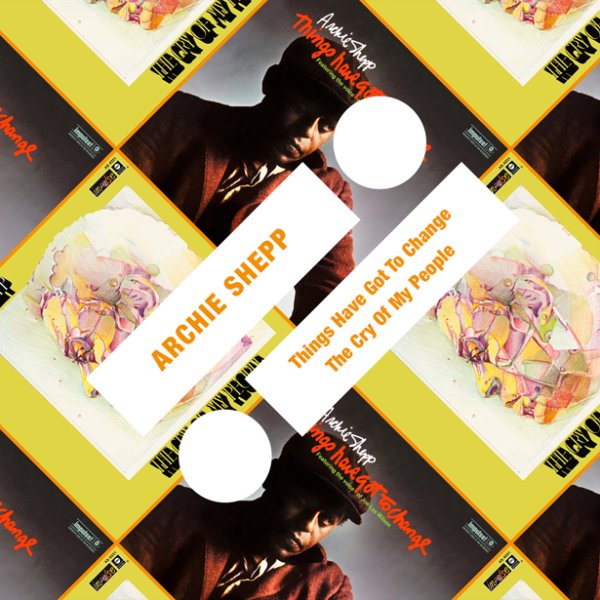 A pair of Impulse Records classics from Archie Shepp! Things Have Got To Change is wonderful post-Paris work from Archie Shepp – a record that has him bringing more focus back into his work after sessions overseas – and also making some great use of the legendary Joe Lee Wilson on vocals! There's a feeling here that's a real change for Shepp, but a great one too – a sound that's trying to reach new levels of expression in jazz – with a bit less of the sharp edges of the 60s, and more of the warmer, more righteous modes of the post-Coltrane generation. Wilson's vocals really help Shepp achieve those aims – by adding a lyrical balance to the tunes, and imbuing them with additional messages beyond the instrumentation – especially on the extended suite "Money Blues", which takes up all of side one. Also important is Cal Massey, who composed two of the tracks on the set, and also plays electric piano alongside Shepp in a spare duet on the beautiful "Dr King The Peaceful Warrior". Other players include Grachan Moncur and Charles Greenlee on trombones, Billy Butler on guitar, James Spaulding on alto and flute, and Ted Daniels on trumpet – and Romulus Franceschini adds some electronic music on "Things Have Got To Change". Cry Of My People is one of the most righteous albums ever from Archie Shepp – a beautiful late Impulse set of grooves, and a record that matches the genius of Attica Blues! Shepp's working with a losse collective of players that includes Charles Greenlee, Harold Mabern, and Beaver Harris – plus vocalists like Joe Lee Wilson and Peggie Blue – all to craft a set of tunes that are as righteous and political as they are spiritual and soulful! The great Cal Massey handled arrangements on a number of the tracks on the set – bringing together the players with a wonderfully unified feel, pushing away the easy spirituality of earlier records to forge a massively powerful sound – and Shepp matches his great efforts by blowing some of his most soulful lines on record! Titles include the wonderful "African Drum Suite (parts 1 & 2)", plus "A Prayer", "Cry Of My People", "The Lady", "All God's Children Got A Home In The Universe", and "Rest Enough".  © 1996-2022, Dusty Groove, Inc.

Soul Song
Enja/Ultra Vybe (Japan), 1982. New Copy
CD...$13.99
An overlooked treasure from Archie Shepp – a set recorded for the Enja label with a profile that's not as bold as some of his other albums, but a great later session that has some surprisingly wonderful moments! Perhaps the best of these is the album's long workout on "Mama Rose" ... CD

Black To The Future
Impulse, 2021. New Copy
CD...$9.99 14.99 (LP...$24.99)
Sons Of Kemet borrow a page from the AACM with the title of this excellent album – maybe no surprise, as the work of the London group is every bit as revolutionary as the experiments of the AACM back in the day! As with their previous records, the Sons are working very hard to find a new ... CD

We Are Sent Here By History
Impulse, 2020. New Copy
CD...$9.99 14.99
An amazing album from this soon-to-be-famous group – a set that's even more incredible than their previous record – and that one really knocked us out of the park! Tenorist Shabaka Hutchings is in tremendous territory here – recording for Impulse Records, and completely ... CD