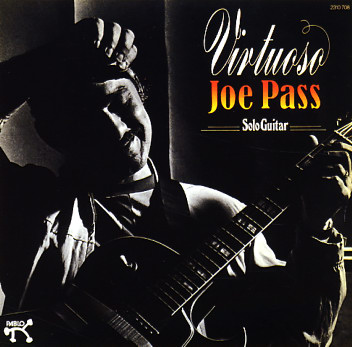 Solo guitar by Joe Pass – a beautiful little album that's a perfect showcase for the new sensitivity in his music during his years at Pablo records! The Joe Pass heard here is light years away from the guitar player who made a few gimmicky records a decade before – and this album has Joe coming across with a gentle, but sophisticated approach to his instrument that we never would have expected in the past! Titles include "Night & Day", "My Old Flame", "Here's That Rainy Day", "Sweet Lorraine", "All The Things You Are", and "Round Midnight".  © 1996-2021, Dusty Groove, Inc.
(Remastered OJC pressing with black and white cover image. Barcode has a cutout hole.)

Blues Dues
Pablo/OJC, 1984. Used
CD...$7.99
Solo guitar work from the great Joe Pass – recorded live at Long Beach City College. Tracks include "Wave", "Round Midnight", "All The Things You Are", and "Bluesette". CD

Joy Spring
Blue Note/Pacific Jazz, 1964. Used
CD...$9.99
A gem by Joe Pass – recorded "live" in the studio a few months before his legendary For Django album, but never issued until the 70s! The set's got a freeness that you don't always hear in some of Pass' other more restrained work – and working with a quartet that includes ... CD

Prime Time (Japanese paper sleeve edition)
Pablo (Japan), 1977. Used
CD...$24.99
The title's not a hokey TV reference or anything like that – but a strong reminder that the Count Basie group was still very much in their prime during the 1970s, thanks especially to the recording talents that the Pablo label brought to records like this! Most of the work here was arranged ... CD