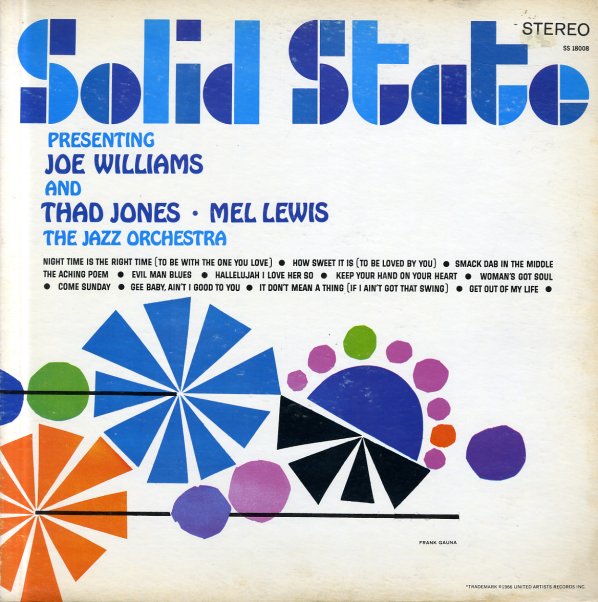 A funky big band album, recorded by Thad Jones & Mel Lewis, with the great Joe Williams on vocals! The record is one of the most sought-after by the team – probably because it includes the hard breakbeat version of "Get Out of My Life Woman". The other tracks are pretty funky, too, with nice soul groovers like "Night Time Is The Right Time", "Woman's Got Soul", and "How Sweet It Is". Players include Pepper Adams, Joe Farrell, Jerome Richardson, and Roland Hanna – and the Jones/Lewis group is at the height of its hipness here!  © 1996-2021, Dusty Groove, Inc.
(Cover has a mostly split top seam and light surface wear.)

Presenting Joe Williams And Thad Jones Mel Lewis (purple cover)
Solid State, 1968. Very Good Gatefold
LP...$6.99
A funky big band album, recorded by Thad Jones & Mel Lewis, with the great Joe Williams on vocals! The record is one of the most sought-after by the team – probably because it includes the hard breakbeat version of "Get Out of My Life Woman" that's been sampled often over the ... LP, Vinyl record album

Chains Of Love
Jass, Early/Mid 60s. Near Mint-
LP...$14.99
A collection of recordings accompanied by Dale Sherman and his orchestra in 1965, The Joe Williams Trio with Harold Mabern, Herbert Brown, and Robert Thompson in 1966, and with Ray Bloch and his orchestra from 1962 through 1964. LP, Vinyl record album