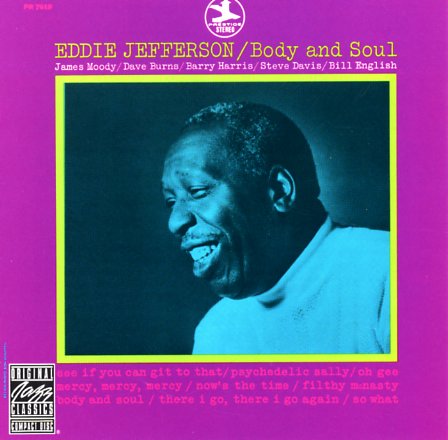 Seminal work from one of the hippest jazz singers ever – a session that showed the world that Eddie Jefferson was firmly back in business during the 60s! The set's got a really rollicking feel, and a bit more influence from soul than the bop of Eddie's roots – with elements of gospel and R&B filtering into the mix from time to time, alongside some of the more sophisticated jazz styles we've always loved in Jefferson's vocals. The group features some great tenor work from James Moody – one of Eddie's frequent musical partners – plus Dave Burns on trumpet, Barry Harris on piano, Steve Davis on bass, and Bill English on drums. Titles include "Now's The Time", "So What", "Psychedelic Sally", "Filthy McNasty", "Oh Gee", and "See If You Can Git To That" – plus a very cool spoken introduction by Ed Williams!  © 1996-2021, Dusty Groove, Inc.

Ella & Oscar (with bonus tracks) (OJC Remasters)
Pablo/OJC, 1975. Used
CD...$5.99
Ella Fitzgerald, recorded in a nice lean setting – with mostly just the piano of Oscar Peterson to back her up, plus a bit of extra bass from Ray Brown on a few of the album's tracks! We love Fitzgerald in this mode – which is quite a change from some of her more familiar 70s work, and ... CD

Fitzgerald & Pass – Again
Pablo/OJC, 1976. Used
CD...$8.99
Ella Fitzgerald and Joe Pass return to the studio just a few years after their initial meeting – once again to work in a stripped-down duet format that's completely sublime! The spare setting is one that Ella never got in the older days – and there's an intimacy here that almost makes ... CD

Dinah Jams
EmArcy/Phonogram, 1954. Used
CD...$4.99
One of the best jazz-based sessions recorded by Dinah Washington in the 50s – appropriately titled Dinah Jams, which is a pretty good reference to the feeling of the set! The sessions were recorded in a relatively relaxed, intimate feel – not necessarily as unbridled as a true jam ... CD

Live At Yoshi's
Verve, 1998. Used
CD...$3.99
Warm, wonderful work from Dee Dee Bridgewater – a relatively straight jazz album, and a hell of a swinger, too! The set's a live date, and has a relaxed, easygoing quality we really love – that soulful, personal feel that Dee Dee picked up strongly in her later years – quite a ... CD