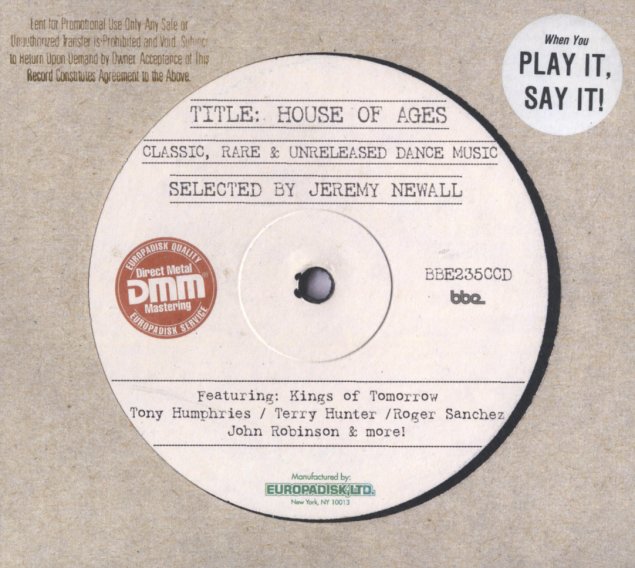 Not really the house of ages – given that most of these cuts are so rare, they're only making their first appearance here – but a great little collection that reminds us that there's still so much to discover in the funky underground of the last few years of the 20th Century! Jeremy Newell really knocks it out of the park with this one – and comes up with a deep, soulful collection of house tracks from the farthest reaches of the scene – either work that only appeared on very obscure singles, or didn't even make it past tape back in the day – leaping forth here with a wickedly groovy sound that's more than worth the wait. Titles include "Take Me Higher" by Jimi Polo, "I Promise (more beats for passion mix)" by Mark Rogers, "Keep On Pressing (KOT orig mix)" by Sean Grant, "More I Get" by Teleport feat Russell Patterson, "Yo Razor" by Arts & Craft with Razor Cain, "Don't Run Away" by Soul Dhamma, "When I See You (tight voc)" by Frank Youngwerth with Ernie, "Freak It (Tony Humprhies inst mix)" by Johanna, "Mainline (Roger S Ego trip mix)" by Tribal House, "We Can Make It (unreleased dub)" by UBQ Project, and "Deeper (Benji Candelario's deeper than deep unreleased mix)" by Susan Clark.  © 1996-2023, Dusty Groove, Inc.

Life Between Islands – Soundsystem Culture – Black Musical Expression In The UK 1973 to 2006
Soul Jazz (UK), 1970s/1980s/1990s/2000s. New Copy 2CD
CD...$21.99 22.99
A really fantastic little collection – a look at the way that sounds from the Caribbean changed over nicely when brought to the UK scene – where immigrants from former British territory really helped to transform the sound of London in the 70s! The music here is served up in a range of ... CD

Influences Vol 2 – A Selection Of Drum N Bass, House, Brazilian, & Disco – Compiled By DJ Marky
BBE (UK), 2017. New Copy 2 CDs
CD...$9.99 19.99
Rare club cuts from a few different generations – all brought together here in a really wonderful collection! The set's supposed to tip us off to the influences on the music of DJ Marky – but even if you don't care about him at all, you'll find plenty here to love – as the ... CD

Kev Beadle Presents Private Collection 3 – More Independent Jazz Sounds From The 70s & 80s
BBE (UK), 1970s/Early 80s. New Copy
CD...$9.99 19.98
The title says "jazz", but there's a lot more going on here – a range of groundbreaking sounds and styles from the 70s, with some sweet electric modes, occasional Latin rhythms, currents of soul, and even a bit of Brazilian too! The package really takes us back to the kind of rare ... CD