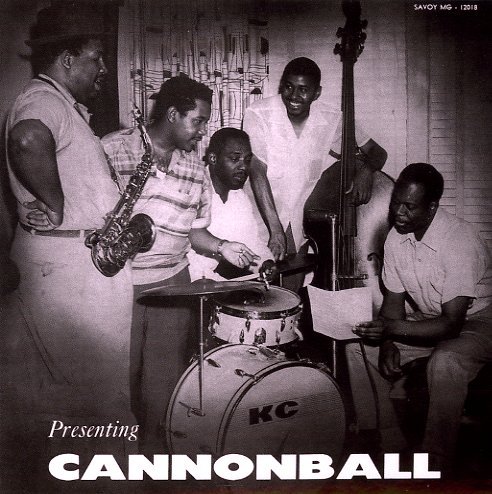 One of Cannonball Adderley's first albums – recorded for Savoy way back in 1955, and done with a free and open style that's a nice contrast to his tighter sides for Mercury! The album's very relaxed – that hardbop blowing session mode that Savoy virtually pioneered – letting the players open up in comfortable studio space, working together almost as they would on a hip live date. Cannon's in the lead on alto, and the group also features Nat Adderley on cornet, Hank Jones on piano, Paul Chambers on bass, and Kenny Clarke on drums – a classic Savoy rhythm section for the two horn players. Tracks are long, and titles include "Spontaneous Combustion", "Still Talkin To Ya", "Caribbean Cutie", and "A Little Taste".  © 1996-2022, Dusty Groove, Inc.
(80s Japanese SJ pressing.)

Encores – The Savoy Sessions
Savoy, Late 40s. Near Mint-
LP...$9.99
An 80s issue looking back on alternate takes of seminal bop material cut by Bird for Savoy. The recordings here are all of alternate versions of those originally released by Savoy on 10"s and 78s, and feature Parker alongside Miles Davis, Dizzy Gillespie, Max Roach, Bud Powell and others. 16 ... LP, Vinyl record album

Charlie Parker Memorial Vol 3 (UK version)
Savoy/Realm (UK), Late 40s/Early 60s. Very Good
LP...$7.99
One of the better of the many posthumous albums that Savoy issued after Bird's death. The set combines one side of master takes and alternates of classic Parker material for the label with Miles Davis, Bud Powell, Tommy potter and Max Roach, and another of Bird's recordings with a young Miles ... LP, Vinyl record album

I Hear Ya Talkin
Savoy, 1959/1984. Very Good+
LP...$8.99
Never-issued material from reedman Frank Wess – done around the same time as his other all-star sessions for Savoy, but even more obscure! The lineup features Frank on flute, tenor, and alto – with Thad Jones on trumpet, Curtis Fuller on trombone, and Hank Jones on piano! LP, Vinyl record album