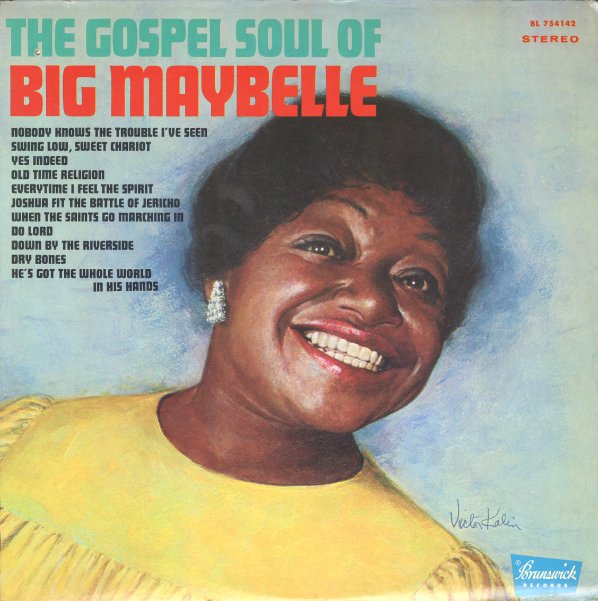 An obscure session for Big Maybelle, but a great one too – a record that has her moving past the melancholy blues of her earlier work, into a lively gospel-based mode that's surprisingly great for her voice! The sound is quite upbeat and joyous – in a style that really has Maybelle's voice soaring to the skies – supported by arrangements from Alan Lorber and John Jacobs that are a bit like some of the backings Jackie Wilson received at Brunswick, including some additional chorus support. Tunes are a mix of gospel standards and a few secular tracks as well – and titles include "Nobody Knows The Trouble I've Seen", "Do Lord", "Dry Bones", "Down By The Riverside", and "Swing Low Sweet Chariot".  © 1996-2021, Dusty Groove, Inc.
(Cover has some light aging on the back and a small cutout hole, but looks great overall.)

Two Sides Of Gene Chandler
Brunswick, 1969. Very Good-
LP...$7.99
A fantastic lost album by the great Gene Chandler – and one of his most sophisticated soul documents! The record was Gene's last album for Brunswick – issued shortly before Gene scored big once again on Mercury, which is why it's probably often lost in the shuffle of time. The record's ... LP, Vinyl record album

Sings The World's Greatest Melodies
Brunswick, Early 60s. Very Good+
LP...$6.99
Weird record that has Jackie singing a bunch of different stuff, from a bunch of different sources, but still staying mostly in his Brunswick soul bag. Dick Jacobs did the arrangements, and the tracks include "Pianissimo", "Forever And A Day", "My Empty Arms", and ... LP, Vinyl record album

Best Of Norman Connors & Friends
Buddah/Arista, 1978. Very Good+
LP...$7.99
Some great tracks from the jazzy soulful genius of Norman Connors! Connors is one of the best crossover soul jazz artists of the 70s – with a masterful blend of styles that's matched by only a few other artists, like Roy Ayers or Leroy Hutson. This set includes tracks from his Buddah and ... LP, Vinyl record album

Soul '69
Atlantic, 1969. Very Good+
LP...$24.99
'69 was certainly Aretha's year – as the success of her initial round of Atlantic recordings had pushed her fully into the limelight, making her one of the most exposed, most reported-on artists in soul music! This album was cut during the height of that time, with Arif Mardin handling all ... LP, Vinyl record album