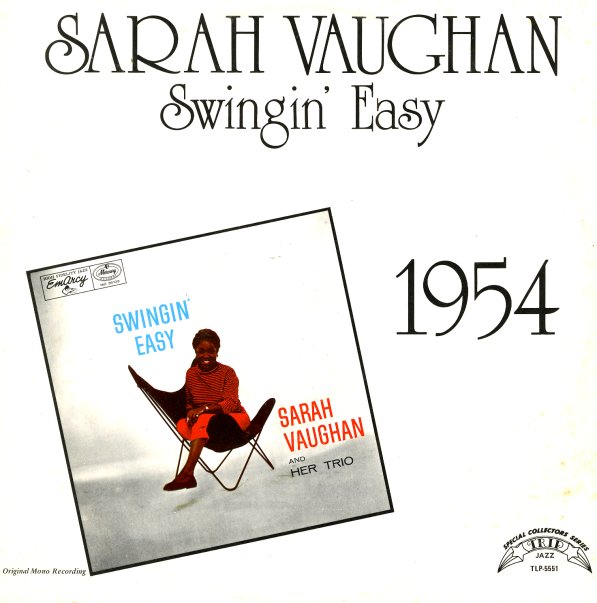 Very nice jazz-oriented material that has Sarah working with Jimmy Jones, one of her best accompanists, or John Malachi, who was in Billy Eckstine's band at the same time Sarah was with the group. All the tracks have nice small combo instrumentation – and Sarah keeps things nice and warm vocally, free to get a bit more intimate than usual in the album's casual setting. Titles include "All Of Me", "Lover Man", "Polka Dots & Moonbeams", "Prelude To A Kiss", and "You Hit The Spot".  © 1996-2022, Dusty Groove, Inc.
(70s Trip pressing. Cover has light surface wear.)

No Count Sarah (Trip)
Mercury, 1958. Near Mint-
LP...$1.99 4.99
The title's a bit of a joke – because the record features a batch sidemen from the Count Basie band – Thad Jones, Joe Newman, Freddy Green, Billy Mitchell, Frank Foster, and others – all working with Sarah, but the Count's name is missing, due to contractual obligations! Despite ... LP, Vinyl record album

In The Land Of Hi Fi (Trip pressing)
EmArcy/Trip, 1955. Near Mint-
LP...$5.99
A hip album from Sarah Vaughan – one recorded with great jazz backings from Ernie Wilkins, and featuring a young Cannonball Adderley as the main soloist! The addition of Adderley's alto definitely brings a swinging sound to the set – a sense of soul that's even deeper than usual for ... LP, Vinyl record album

Sarah Sings Soulfully
Roulette, 1963. Very Good+
LP...$6.99
The title's no lie – as Sarah Vaughan sings here in some very soulful company – thanks to arrangements from Gerald Wilson, which make this record one of the standout from her years on Roulette Records! The other players aren't listed, but they're clearly the kind of top-shelf bunch ... LP, Vinyl record album

Pop Artistry
Mercury, 1965. Very Good+
LP...$9.99
A sweet little album that serves up exactly what it promises in the title – a set of 60s pop tunes, all reworked by the jazz vocal artistry of Sarah Vaughan! The set's one of the most upbeat and bouncy that Vaguhan cut during the decade – and although you might know some of the tunes ... LP, Vinyl record album

After Hours With Miss D
EmArcy, Early 50s. Very Good
LP...$8.99
Dinah's in a perfect setting here – one that gets more jazz out of her style than other records at the time! The "after hours" setting has Dinah singing with a relaxed jazz combo – one that features Eddie Lockjaw Davis and Paul Quinichette on tenor, Clark Terry on trumpet, ... LP, Vinyl record album