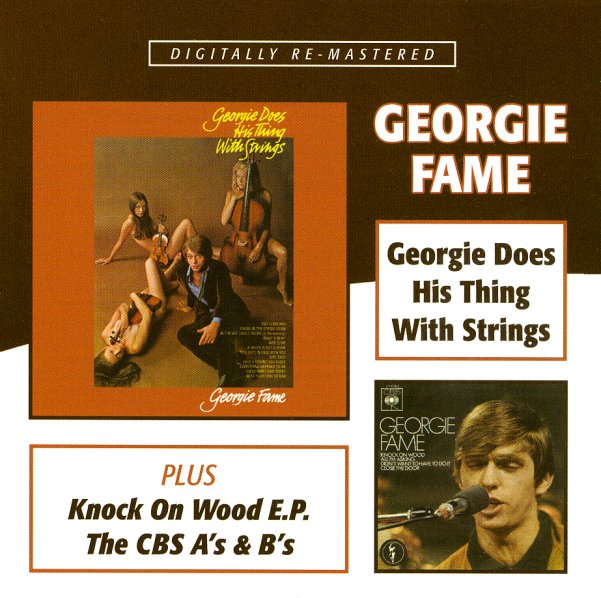 Some of our favorite work ever from the mighty Georgie Fame – key tracks from his years on CBS – when he was really moving past straight jazz, into a whole great style of his own! First up is the full album Georgie Does His Thing With Strings – a set that has Georgie Fame singing with a host of string-heavy backings from the great Keith Mansfield! Given Mansfield's roots in the sound library scene, the style here is never as sleepy or hokey as you might expect from the "strings" in the title – but there is a moodier, mellower approach than you'd hear on other Fame albums – a style that's partially aimed at older jazz vocal modes, but which also echoes with sounds of the Scott Walker generation – a newly mature mode that's a really great fit for Georgie's unique style of singing, and which exposes yet another amazing side of his seemingly limitless talents! There's always a nice sense of warmth and wit going on – one that keeps these tunes from just being the usual sort of standard vocal fare of the period – and Mansfield's backings have a lean quality that often pulses with a very gentle groove at the bottom. Titles include "Who's Kissing You Blues", "Girl Talk", "This Guy's In Love With You", "A House Is Not A Home", "Woe Is Me", "Need Your Love So Bad", and "Guess Who I Saw Today". Next is the rare Knock On Wood EP – with four songs that include the title track, plus "Close The Door", "All I'm Asking", and "Didn't Want To Have To Do It". THEN – the CD adds in 21 more bonus tracks – almost all non-album single cuts by Fame from the late 60s and start of the 70s – most of which have never been reissued, and are a flurry of mad soul, clever vocals, and lots of hip instrumental twists – all delivered with that undeniable Georgie Fame charm. Titles include "Down Along The Cover", "Seventh Son", "No Thanks", "Try My World", "Bidin My Time", "For Your Pleasure", "Kentucky Child", "Peaceful", "Entertaining Mr Sloan", "Someday Man", and "The Movie Star Song".  © 1996-2023, Dusty Groove, Inc.