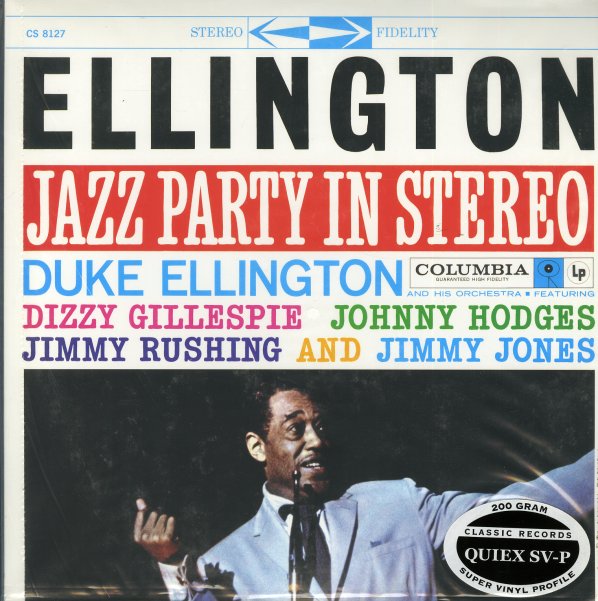 Very nice work from one of Ellington's revival periods – when he was signed to Columbia in the late 50s, and recording some of the best work of his career. This set moves past the modernism of some of Duke's other sessions at the time, and offers a more straight-ahead set in true "jazz party" tradition. Jimmy Rushing sings vocals on a few tracks, and Duke's band features Johnny Hodges, Paul Gonzalves, Jimmy Woode, and a guest appearance by Dizzy Gillespie. Tracks include "Ready Go", "Red Garter", "Malletoba Spank", "UMMG", and "Tymperturbably Blue".  © 1996-2022, Dusty Groove, Inc.
(Columbia Special Products pressing.)

Drum Is A Woman
Columbia, 1956. Near Mint-
LP...$6.99 (CD...$4.99)
A hokey cover and title, but a hip little record from Duke Ellington – kind of a story of percussion and jazz, all wrapped together with some great vocals and narration! The format is kind of far-reaching, but never too stuffy – and in a way, the album offers a great opportunity to ... LP, Vinyl record album

Ginseng Woman
Columbia, 1977. Near Mint-
LP...$7.99
A wonderfully strong effort from guitarist Eric Gale – a player who'd done countless studio work on fusion sessions in the 70s, but who never really broke that strongly as a leader until this set! Gale's tone here is nicely compressed, but still has a warmth that comes from his use of a ... LP, Vinyl record album

Music Magic
Columbia, 1977. Near Mint-
LP...$7.99
Lots of musical magic here – a further extension of the Return To Forever vibe that helped Chick Corea find some of his best energy of the 70s! The style is still as tightly focused as before, but also opens up with a bit more soul, too – trading some slight moments of jamming for a ... LP, Vinyl record album