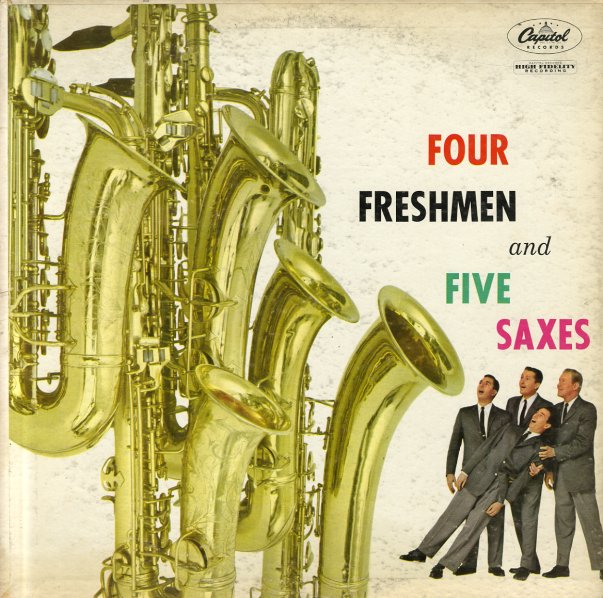 One of our favorite sides by this excellent 50s vocal group – a tightly swinging batch of tracks with a really moody, modern edge! Half the set is arranged by the great Pete Rugolo, in the manner of the group's famous "trombones" session, done earlier with Pete – and the other half of the set is arranged by group member Dick Reynolds, following closely in Rugolo's style. The whole thing's great – with a nice brace of west coast saxes backing up the vocals – and titles include "For All We Know", "I May Be Wrong", "East Of The Sun", "Liza", and "This Can't Be Love".  © 1996-2022, Dusty Groove, Inc.
(Original teal label mono pressing, including Capitol inner sleeve. Cover has a small index sticker, light wear & aging.)

Four Freshmen & Five Trombones
Capitol, 1955. Very Good
LP...$2.99
A masterpiece – and possibly the greatest record ever by the Four Freshmen! The album is arranged by Kentonite Pete Rugolo, who gives it a very dark feel – similar to his amazing work on June Christy's Something Cool album (which is a perfect complement to this one) – and he's ... LP, Vinyl record album

Broadway My Way
Capitol, 1963. Near Mint-
LP...$2.99
A great counterpart to Nancy Wilson's classic Hollywood My Way album for Capitol – and like that one, a classy set of tunes arranged and conducted by Jimmy Jones! The style is similar to Nancy's more pop-oriented work, with perhaps a bit more pause on the ballads to unlock their more ... LP, Vinyl record album