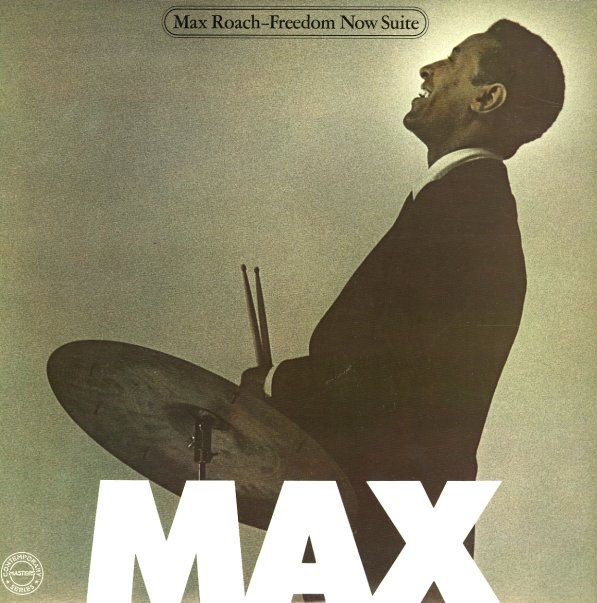 80s pressing of Max Roach's legendary political suite, an insistent plea for freedom and equality during the civil rights movement. One of the most righteous albums that Max Roach ever cut – and a monumental jazz release from the heart of the Civil Rights era! As you can guess from the cover and title, there's a very political bent to the record – served up in righteous lyrics penned by Oscar Brand Jr, and sung by Abbey Lincoln at her most biting – really stepping out here in just a few short years from her previous role as a straight jazz singer, and firmly grabbing up territory no other female vocalists had touched! For this momentous event, Roach gathered together a really special group for the record – players who include regular partners Booker Little on trumpet and Julian Priester on trombone – alongside surprising guests like Coleman Hawkins on tenor sax, Olatunji on percussion, and Ray Mantilla on congas. There's no piano at all on the record, and the tracks are all long ones – stretching out with soaring horn passages next to the vocals, and plenty of percussion at the bottom to get things moving! Titles include "Driva' Man", "Tears for Johannesburg", "Freedom Day", "All Africa", and "Prayer/Protest/Peace".  © 1996-2023, Dusty Groove, Inc.
(Cover has a promo stamp and a light trace of a price sticker.)

Tatum Touch (10 inch LP)
Columbia, Early 50s. Very Good+
LP...$9.99
Art plays 6 solo numbers – all with that Tatum Touch! Titles include "Humoresque", "Tatum Pole Boogie", "How High The Moon", and "I Know That You Know". Weird little cover – with a photo of Tatum pasted behind a bunch of white folks in a pile ... LP, Vinyl record album

Master
Columbia, 1975. Very Good+
LP...$7.99
A gem of a session from Stan Getz – recorded in 1975, but unissued until the mid 80s! The set was probably lost amidst the flurry of more dramatic jazz recorded by CBS at the time – as it's a relatively understated session that has Stan blowing with acoustic accompaniment from Albert ... LP, Vinyl record album

I Know Pres (aka Smooth Groove) (Japanese pressing)
Candid/CBS (Japan), 1961. Near Mint-
LP...$34.99
One of the only albums ever cut as a leader by soul jazz guitarist Ray Crawford – a contemporary of Grant Green and Wes Montgomery, but a player who's hardly ever gotten his due! This rare date was originally recorded for the short-lived Candid label back in 1961, but was only issued later ... LP, Vinyl record album

I Know Pres (aka Smooth Groove) (Japanese pressing)
Candid/CBS (Japan), 1961. Near Mint-
LP...$34.99
One of the only albums ever cut as a leader by soul jazz guitarist Ray Crawford – a contemporary of Grant Green and Wes Montgomery, but a player who's hardly ever gotten his due! This rare date was originally recorded for the short-lived Candid label back in 1961, but was only issued later ... LP, Vinyl record album

Jazz Impressions Of Eurasia
Columbia, 1958. Very Good+
LP...$24.99
Dave Brubeck takes on the Eurasian scene – with wonderfully groovy results! The album's one of Brubeck's first in the "impressions" series, and it's a really colorful assortment of tunes – tracks with some lyrical and exotic moments that come through strongly, and which ... LP, Vinyl record album