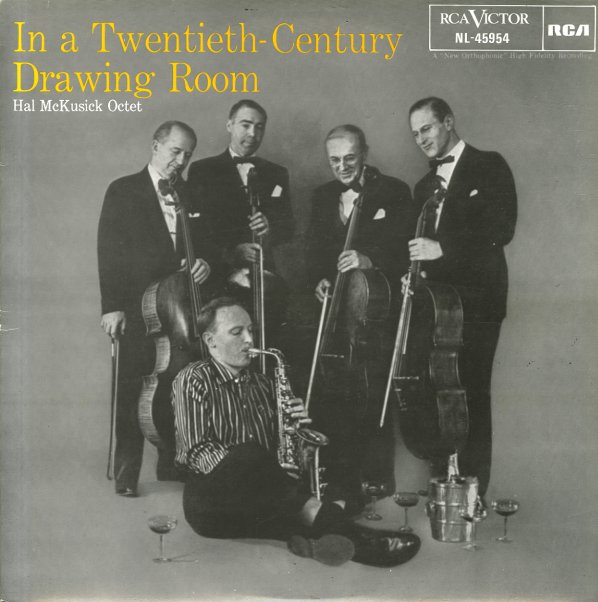 In A Twentieth Century Drawing Room

Reed player Hal McKusick has always been one of our favorite talents from the 50's, but he always seems to be overlooked by the history books because he's not easy to fit in with any of the larger schools of jazz. With his beautiful measured style on alto and clarinet, he certainly wasn't a bopper, but since he still could swing, and arrange for tight little groups, he wasn't as much of a modernist as you might expect. Instead, he serves as a great bridge between the more out stuff of artists like Jimmy Giuffre and the refined bop of reed players like Zoot Sims and Al Cohn. This 1955 RCA recording is one of his best efforts ever, and features a tight octet playing what appears to be "chamber jazz", but which swings a lot more than any of the west coast stuff of the same name that was coming out at the time. A core group of alto, guitar, bass, and drums is backed by a string quartet, for a sound that provides a haunting platform for McKusick's beautiful reedwork. Tracks include "Gift Of The Magi", "Theme", "Alto Stratus", and "Brother Jack".  © 1996-2021, Dusty Groove, Inc.
(80s Spanish Fresh Sound reissue.)