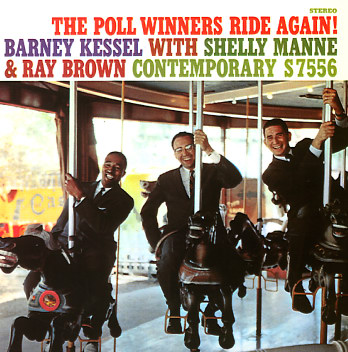 A nice follow-up to the original Poll Winners set on Contemporary – one that features the trio of Barney Kessel, Shelly Manne, and Ray Brown – all working in a relatively relaxed setting, and hitting a vibe that's a bit more easygoing than you'd expect to catch for Contemporary at the time! The groove's surprisingly open and soulful, making the record feel a bit like a Prestige Swingville or Moodsville set – and it's especially nice to hear Kessel in such an unfettered set. Titles include "Foreign Intrigue", "Custard Puff", "Be Deedle Dee Do", "Volare", and "The Merry Go Round Broke Down".  © 1996-2022, Dusty Groove, Inc.
(1986 Japanese pressing.)