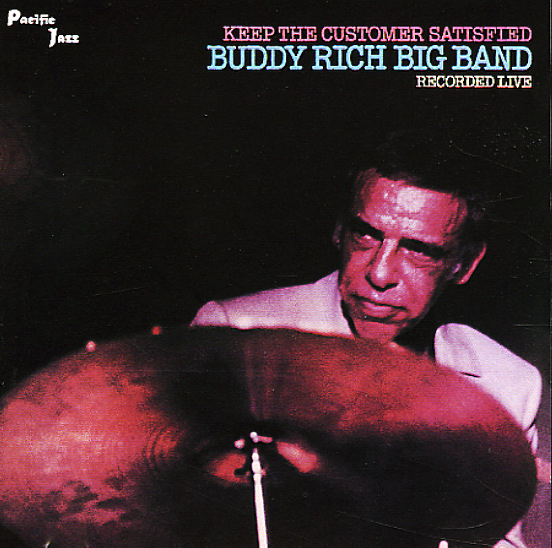 Buddy certainly knew how to keep the customer satisfied – as you'll hear on this hip set of big band grooves, recorded by Buddy for Liberty Records in 1970. The set's got Buddy working with a tight group of younger players, in a mode that's not exactly funky, but which owes a lot to the funking up of the big band scene that was going on during the late 60s. There's electric bass underneath most of the cuts, and bubbly organ emerges from the horns on a good number of titles. Tracks include "Groovin Hard", "The Juicer Is Wild", "Long Day's Journey", "Celebration", "He Quit Me", and more.  © 1996-2020, Dusty Groove, Inc.
(Liberty/UA pressing. Cover has ring and edge wear with a split spine and bottom seam.)

Buddy Rich Sings Johnny Mercer
Verve, 1956. Very Good
LP...$19.99
One of the few rare vocal sessions recorded by Buddy Rich – and a surprisingly swinging album that makes us wonder why he didn't record more like this! Arrangements are by Buddy Bregman, who was always the great man at Verve for backing less-confident singers – and unlike other Buddy ... LP, Vinyl record album

Buddy Rich Band
MCA, 1981. Near Mint-
LP...$3.99
Slick funky fusion from Buddy – a bit of a change from some of his other work of the 70s, but still pretty nice. The format is still in a big band mode, but the overall production's a bit slicker – so that there's more electric and studio touches next to Buddy's full-on horn section ... LP, Vinyl record album