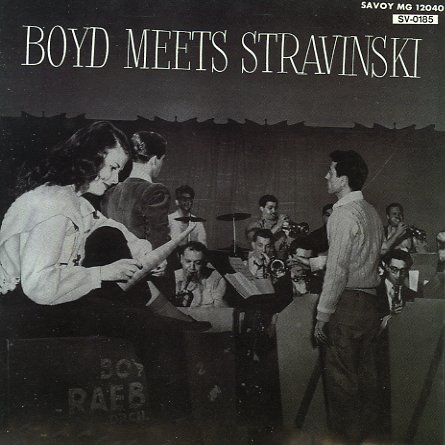 You may not know the name of Boyd Raeburn – but you'll certainly recognize the great players on this album, a hip set that includes Dizzy Gillespie, Hal McKusick, Lucky Thompson, Serge Chaloff, and Oscar Pettiford. Raeburn was a modernist swinger – in a mode that was a bit like some of the work that McKusick was laying down during the mid 50s, but with traces of the postwar work of Stan Kenton, and maybe a hint of the straight side of Raymond Scott. The tracks on this set are some of the finest sides he ever cut – and they sparkle with imagination and modernist zeal, yet never fail to swing hard and tight. Titles include "March Of The Boyds", "Boyd's Nest", "Boyd Meets Stravinsky", "Dalvatore Sally", and "Interlude (Night In Tunisia)". Plus, this CD features rare tracks not on the original LP – "Hep Boyd's" and "Rip Van Winkle".  © 1996-2022, Dusty Groove, Inc.
(Out of print.)

Bohemia After Dark (with bonus track)
Savoy, 1955. Used
CD...$7.99
An excellent hardbop session from the glory days of the Savoy label – easily one of the label's key 50s classics! Drummer Kenny Clarke's at the front of the group – but all players are great, and the set features work by Cannonball Adderley on alto, Jerome Richardson on tenor, Donald ... CD