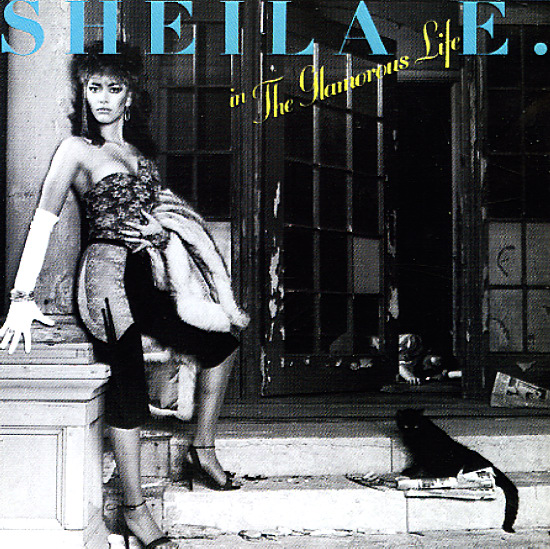 Sheila E In The Glamorous Life

A fantastic meeting of two generations of soulful music – Sheila E, the daughter of Cali Latin soul genius Coke Escovedo, meets up with the snappingly funky world of Prince – and results in one of the strongest records of Sheila's career! The singer/percussionist had already been around for about a decade on record – turning out some great Latin work with her brother Pete in the Bay Area – but this set has Sheila going of the top with a great Paisley Park groove, really working with lots of influences from Prince, but still also getting plenty of Latin elements of her own into the mix – on long tracks that are filled with wonderful rhythms and plenty of great percussion too! Titles include the sublime title cut "The Glamorous Life" – plus "The Belle Of St Mark", "Oliver's House", "Strawberry Shortcake", "Noon Rendezvous", and "Next Time Wipe The Lipstick Off Your Collar".  © 1996-2022, Dusty Groove, Inc.
(German pressing. Cover has an import sticker.)

Mazarati
Paisley Park, 1986. Near Mint-
LP...$9.99
A short-lived Prince side project from the mid 80s – pretty tinny, and decidedly weaker than his own work, or that of groups like The Family or The Time. Titles include "Strawberry Lover", "Suzy", "Player's Ball", "Lonely Girl On Bourbon Street", and ... LP, Vinyl record album

Sign O The Times
Paisley Park/Warner, 1987. Sealed 2LP
LP...$39.99 (CD...$28.99, LP...$34.99)
A fantastic record from Prince – a double-length set that came out at a time when the purple one was brimming over with energy and new ideas – and a step slightly in the direction of more socially conscious material! Everything that was great about Prince before the record is ... LP, Vinyl record album