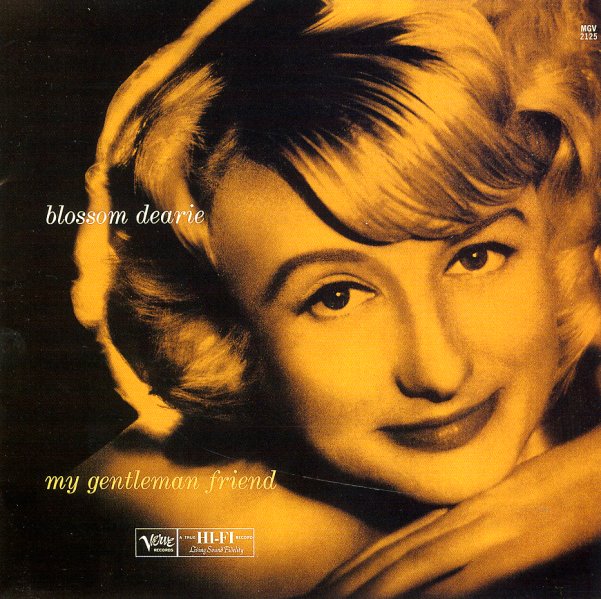 A magical exercise in understatement – and one of Blossom's best albums for Verve! The late 50s session features Blossom back in the US and working with a small combo that includes Bobby Jaspar on flute, Ray Brown on bass, Kenny Burrell on guitar, and Ed Thigpen on drums – all grooving with Blossom's vocals and piano in a spare, yet swinging approach to jazz! The tracks are touched with those wonderful little touches and sweetly-voiced moments that always make Blossom's records better than the rest – and titles include "Little Jazz Bird", "Gentleman Friend", "Boum", "L'Etang", and "Chez Moi".  © 1996-2023, Dusty Groove, Inc.
(2003 digipak pressing.)

Adorable Blossom Dearie (Blossom Dearie – plus bonus tracks)
Verve/El (UK), Mid 50s. Used
CD...$4.99
Adorable is right – because the music here is all pretty darn charming – pulled from Blossom Dearie's first full album on Verve, and mixed with bonus cuts from her Paris years! The first 14 tracks on the set are from the self-titled Blossom Dearie album – quite possibly Blossom's ... CD

Blossom's Planet
Daffodil, 2002. Used
CD...$14.99
A new record by Blossom Dearie – and a really nice one! The set's on her own Daffodil label, but unlike a lot of the sets on that label, which are mostly trio ones, this one features a full group – with great arrangements by Cesar Camargo Mariano, a talent behind some of our favorite ... CD

Give Him The Ooh-La-La
Verve/Polygram, 1957. Used
CD...$4.99
One of Blossom Dearie's fantastic albums for Verve – all of which stand as some of the best recorded work she ever did! The album features Blossom in a warm intimate group, which gives great focus to her endearing voice, and lively piano. She's backed by Ray Brown and Herb Ellis, and she ... CD

Blossom Dearie
Verve, 1956/Late 50s. Used
CD...$3.99
Amazing early work from Blossom Dearie – quite possibly her best album for Verve, recorded in the mid 50s right after her return from work on the Paris scene! The style here is sprightly and whimsical, yet also fragile and human – a blend that few other singers can pull off as well as ... CD

Quiet Nights
Verve, 2009. Used
CD...$3.99
An instant classic from vocalist Diana Krall – a set that takes her to new sorts of sophistication, thanks to the arrangements of Claus Ogerman, which really send things over the top! The title's a reference to a classic bossa tune from the 60s, the sort of material that Ogerman arranged ... CD