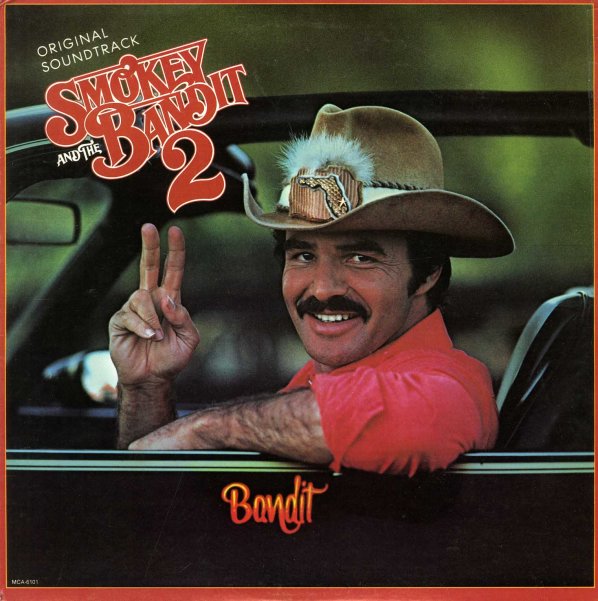 The follow-up soundtrack to the original Smokey film – a bit different than the first in that it mostly contains tracks by a number of then-current country stars, plus a 2 instrumentals done by The Bandit Band, led by Snuff Garrett. The instrumentals are mostly of the fast-pickin type – and titles include "Tulsa Time" by Don Williams, "Again & Again" by Brenda Lee, "Charlotte's Web" by The Statler Brothers, "Texas Bound & Flyin" by Jerry Reed, "Here's Lookin At You" by Mel Tillis, "Pecos Promenade" by Tanya Tucker, and the very strange "Let's Do Something Cheap & Superficial" by Burt Reynolds.  © 1996-2021, Dusty Groove, Inc.
(Shrinkwrap has a sticker. Cover has a cutout notch.)

Band Of The Hand
MCA, 1986. Near Mint-
LP...$6.99
Maybe not the greatest film in the world, but a record that's well-remembered for the title track "Band Of The Hand" – performed by Bob Dylan with The Heartbreakers! Also features tracks by The Reds, Andy Summers, and Shriekback. LP, Vinyl record album

TeeVee Toons – The Commercials
TVT, Late 40s/1950s/1960s/1970s. Near Mint-
LP...$9.99
Shorter than the usual TV Tunes 2 LP sets, and with only 50 tracks – but, oh, what tracks they are! Loads and loads of cool old TV commercials, back from the old days – when nobody cared how goofy they sounded, and when they spent way too much money on studio hacks churning out cool ... LP, Vinyl record album