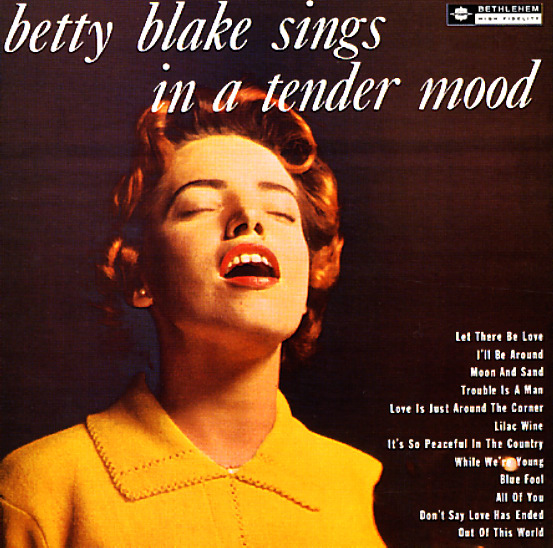 Sings In A Tender Mood

A great little vocal session on Bethlehem – and maybe the only record we've ever seen from singer Betty Blake! Blake's a great vocalist right from the start – one who balances swing and sophistication wonderfully – amidst some very hip jazz backings from a combo that features Zoot Sims and Roland Alexander on tenor, Marcus Belgrave on trumpet, Teddy Charles on vibes, Kenny Burrell on guitar, and Mal Waldron on piano! The set's got a bit more punch than some other Bethlehem vocal dates, but it also has a nice sense of spontaneity too – never over-arranged or too staid, in ways that really show off Blake's swinging side. Titles include "Moon and Sand", "I'll Be Around", "While We're Young", "Blue Fool", and "Trouble Is A Man".  © 1996-2022, Dusty Groove, Inc.
(Out of print, 2013 pressing – includes obi.)

All Of Me (with bonus tracks)
Bethlehem/Solid (Japan), 1956. Used
CD...$18.99
Although the world always remembers Johnny Hartman best for his Impulse recordings with Coltrane, we've always dug some of his earlier stuff – like this album – because the sound's a bit rawer, and the style's got more of a kick! The magical Hartman voice is presented in two great ... CD

Ted Steele Presents Miss Teal Joy (with bonus tracks)
Bethlehem/Solid (Japan), 1955. Used
CD...$16.99
A great little album from this overlooked singer – an east coast vocalist from the 50s, working here on one of the few sessions she ever recorded! Teal's got an exotic look on the cover, but the presentation of the music is right up there in the best mainstream jazz modes of the time – ... CD

Living Scat – Neo Standards
Solid (Japan), 1960s/1970s. Used
CD...$7.99
Breezy and easy vocals from Japan – a collection of recordings made by singer Kayo Ishu from the late 60s and 1970s – not really "scat" in a conventional style, but cool wordless vocals with a sweet jazzy feel! The 19 track set brings together tunes from a variety of ... CD

Little Girl Blue (aka Jazz As Played In An Exclusive Side Street Club) (with bonus tracks)
Bethlehem, 1957. Used
CD...$6.99
A classic set of early jazz recordings by Nina Simone – one of her first albums ever, but already with an approach that's quite different from other singers of the time! Nina's singing a fair bit of standards here, but she brings a deeply personal approach to the material – inflecting ... CD

Carmen McRae Live At Sugar Hill – San Francisco
Time/Solid (Japan), 1962. Used
CD...$14.99
A wonderful set by Carmen McRae – captured at San Francisco's Sugar Hill in 1962 – backed by a tight trio! Carmen is in sweet form here, very loose and and wise, and the group knows just how to fill out the sound. She scats loosely on the opening "Sunday", nearly hits a weep ... CD

Come Dance With Me x
Capitol, Mid 50s. Used
CD...$1.99
Billy May's got Frank nicely swinging on this one – working on a set of older numbers, retuned for the Sinatra sound of 50s Capitol! The band is tight, the sound is right, and Frank steps out nicely on songs that he sung years before in other settings – but quite possibly never so well ... CD