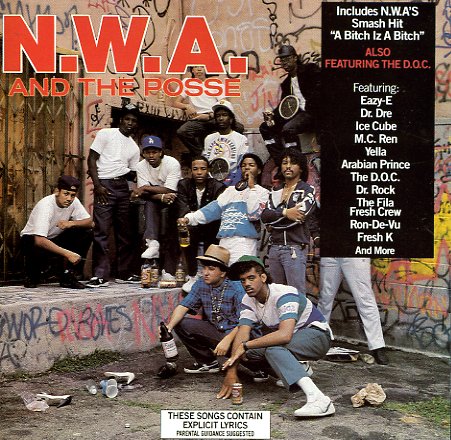 Nice early Ruthless compilation, issued on Macola in '87, and a year later on Priority with a slightly altered tracklist – featuring NWA and other affilated members of the Ruthless stable at the time – with tracks by NWA, solo Eazy-E and Fila Fresh Crew featuring DOC! A genuine blueprint for west coast gangsta and Dr. Dre productions to come – with all tracks produced by Dre, with titles that include "8 Ball", "Panic Zone", and "Dope Man" by NWA. "LA Is The Place" and "Boyz N The Hood" by Eazy E, "Dunk The Funk", "Tuffest Man Alive" and "3 The Hard Way" by Fila Fresh Crew w/DOC and more.  © 1996-2021, Dusty Groove, Inc.

Lethal Injection
Priority, 1993. New Copy (reissue)
LP...$24.99 29.99
A sharp, angry salvo from Ice Cube! Cube's early 90s solo style was firmly established at this point, so Lethal Injection doesn't have the acknowledged classic status of his previous couple albums, but he's still close to his prime that it's well worth your dollar! As you'd guess from the title, ... LP, Vinyl record album