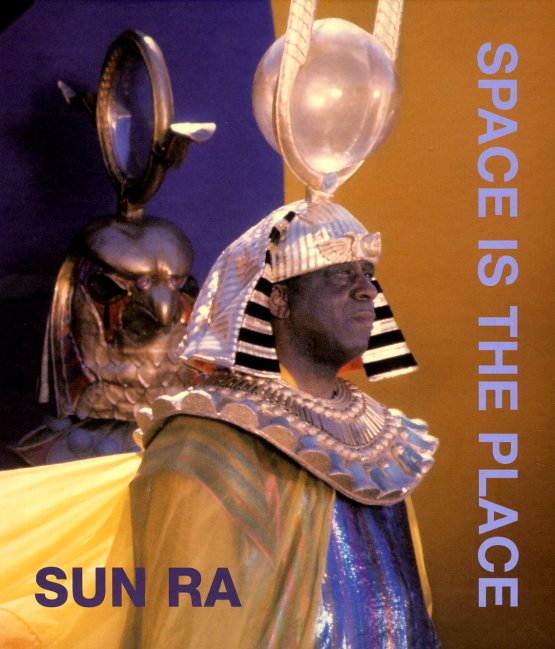 Space Is The Place (hardcover book with CD & DVD)

A legendary film gets a legendary package – a special limited book-style presentation of Space Is The Place – with a DVD that includes two different versions of the film, and a newly-remastered CD presentation of the music, which also includes two never-issued tracks! The book alone is worth the price of the set – a lavish full-color, hardcover volume that features 120 pages of beautiful images from the movie and production – plus reflections by director John Coney, and essay by John Szwed, an interview with actor Ray Johnson, essays by both the producer and cinematographer, and even pictures of the script and contract as well! The movie is great – full of footage of Sun Ra and his Intergalactic Solar Arkestra doing their thing, spraying cosmic tinged free jazz grooves all over their comical, yet still quite political film. It's a really trippy little flick – the kind of strange, anything goes 70s gem where radical politics could co-exist with bizarro comedy and intentionally corny special effects. CD is very cool too – a bit different than usual for the Arkestra, as you'd expect – and the tracks are short haunting numbers, designed to accompany the film's erratic narrative – with a mixture of electric playing, spacey jazz, and a few surprisingly out numbers! Titles include "Watusa", "Calling Planet Earth", "Mysterious Crystal", "Outerspaceways Incorporated", "Cosmic Forces", "Satellites Are Spinning", and a version of "Space Is The Place".  © 1996-2022, Dusty Groove, Inc.
(Limited edition of 3000.)

A2Z+ – Alphabets & Signs (paperback)
Lawrence King (UK), 2018. New Copy
Book...$11.99 32.00
A book that's a typographical masterpiece – a look at letters and signs from around the globe, past and present – organized in a wonderfully striking way! The book is part history, and much more about art and graphic design – as it's filled with page after page of really ... Book

Hamburger Eyes – Inside Burgerworld (hardcover)
Powerhouse Books, 2007. New Copy
Book...$8.99 35.00
If you find the image on the cover as striking as we do, wait until you see what's inside – page after page of brilliant black and white photographs, all taken from the long-running Hamburger Eyes publication – still somewhat young when this book came out, but already clearly a leading ... Book

Andy Warhol (paperback)
Tate (UK), 2020. New Copy
Book...$8.99 31.00
Way more than just another art book on the creations of Andy Warhol – although there are plenty of those inside, too – as the large volume is part of an exhibition at the Tate in London, which looked not just as Warhol's artwork, but also his past, his ties to the larger scene, and some ... Book

Grand Hotels Of The Jazz Age – The Architecture Of Schultze & Weaver (hardcover)
Princeton Architectural Press, 2005. New Copy
Book...$18.99 60.00
We're not normally ones to ooh and ah over hotels – but they do tend to be some of our favorite semi-public spaces in big cities, and this wonderful book looks at a time when lodging was really stepping up to the next level – as firms like Schultze & Weaver were redesigning hotels ... Book

This Goofy Life Of Constant Mourning (hardcover)
Steidl (Germany), 2004. New Copy
Book...$15.99 50.00
A book that's a piece of art in an of itself – as it's the only way these different strands of creative activity from artist Jim Dine could have come together! The approach is unusual – the book is something of a poem, but created from words that Dine wrote on various surfaces in ... Book