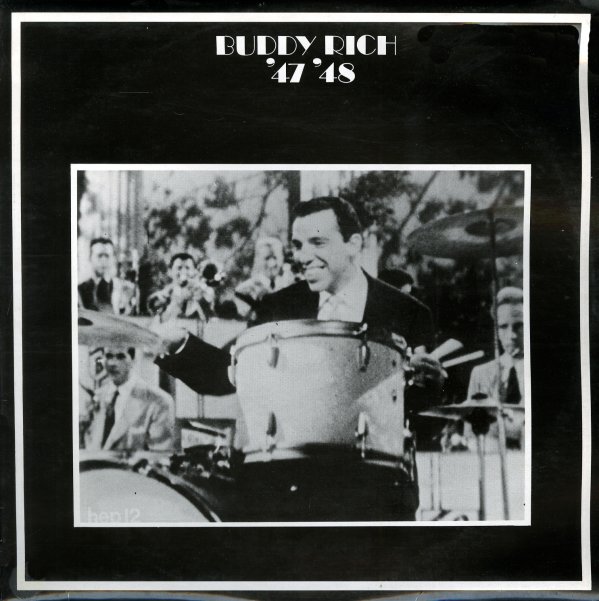 Buddy Rich Just Sings
Verve, Late 50s. Very Good
LP...$28.99
Buddy Rich just sings, not plays drums – and given his famous temper, we're guessing that all the folks in the studio told him he sounds like Mel Torme! Actually, Buddy's not bad on vocals – and he's got a down to earth charm that can make a record like this a surprising charmer – ... LP, Vinyl record album

Buddy Rich In London (Jazz Line)
RCA (France), 1971. Near Mint-
LP...$11.99
Crackling live energy from Buddy Rich – recorded at Ronnie Scott's nightclub in London, and with a sound that recalls some of Buddy's best from the 60s! The group is plenty great – and the attraction here goes way beyond just Buddy's famous work as a leader. As with other Rich albums ... LP, Vinyl record album

Big Band Shout (aka This One's For Basie)
Verve, 1956. Near Mint-
LP...$6.99
A lively little set done strongly in a Basie mode – as you might guess from the title! Buddy's on drums, but the real maestro here is Marty Paich – who handled the arrangements, and most likely brought together the batch of west coast jazzers who inhabit the group – including ... LP, Vinyl record album

Sing & Swing With Buddy Rich
Norgran, Early 50s. Very Good-
LP...$24.99
A record that serves up just what you'd expect from the title – a bit of raspy vocals from Buddy Rich – and some swinging instrumental material, with a group that features Ben Webster on tenor, Joe Newman on trumpet, Oscar Peterson on piano, and Freddie Greene on guitar! LP, Vinyl record album

Swinging Buddy Rich
Norgran, Early 50s. Very Good
LP...$19.99
Buddy's got plenty of help to swing with here – on a set that features work by Benny Carter, Sonny Criss, or Willie Smith on alto, George Auld on tenor, Harry Edison on trumpet, and Gerald Wiggins on piano. The alto work of Smith and Criss is especially great – raspy, edgy, and with a ... LP, Vinyl record album

Rich In London – Live At Ronnie Scott's
RCA, 1971. Near Mint-
LP...$5.99
Crackling live energy from Buddy Rich – recorded at Ronnie Scott's nightclub in London, and with a sound that recalls some of Buddy's best from the 60s! The group is plenty great – and the attraction here goes way beyond just Buddy's famous work as a leader. As with other Rich albums ... LP, Vinyl record album

Buddy Rich (Everest)
Everest, Late 50s. Near Mint-
LP...$3.99
A collection of Buddy Rich material originally issued on Mercury – on records The Voice Is Rich, Richcraft, and The Rich Rebellion – some of which feature Buddy singing a bit, too! LP, Vinyl record album