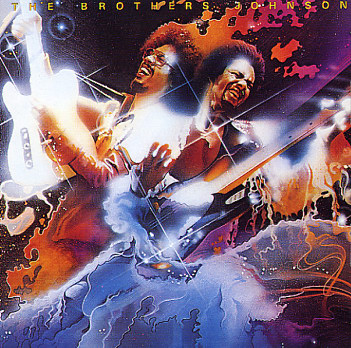 Blam is right – an all-out batch of funky tracks from The Brothers Johnson – captured here right in the middle of their classic period with Quincy Jones! The Q's at the helm on production for the set, and the record's a great extension of their earlier efforts with the man – but a bit more Johnson-tuned (if we can say that in mixed company) – with the bass upfront on some of the best numbers, and a surprisingly strong male ballad approach on some of the gentler tunes. There's a slightly jazzy undercurrent at times, and tracks include "Rocket Countdown/Blastoff", "Ride-O-Rocket", "Streetwave", "Blam", "So You Won't Stay", "Ain't We Funkin Now", and "Mista Cool".  © 1996-2022, Dusty Groove, Inc.
(Cover has a cutout notch, some surface wear, and a name in marker in back. Label has a small sticker.)

Shine On
A&M, 1980. Near Mint-
LP...$9.99
Massively solid boogie work from Jeffrey Osborne and LTD – still grooving beautifully at the end of the 70s, and working here with top-shelf production from Bobby Martin! The set's got that buoyant LTD groove that was a perfect foil for Osborne's soaring vocals – a sound that never ... LP, Vinyl record album