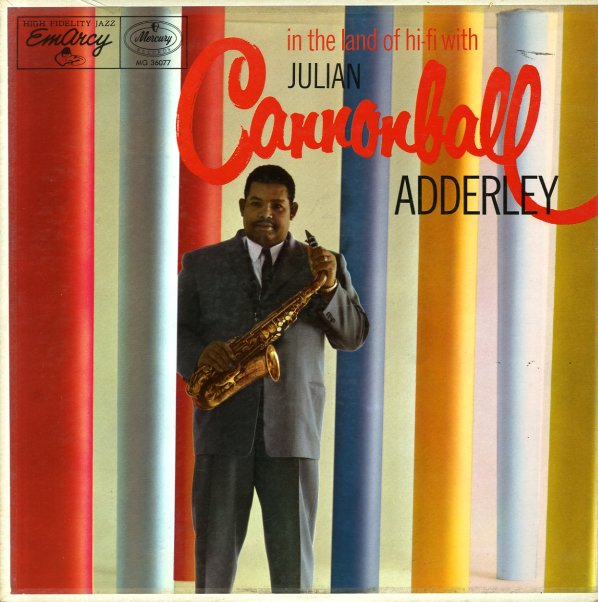 In The Land Of Hi Fi With Julian Cannonball Adderley

The title's a bit of a mouthful, but a good description of the way Cannonball was presented in the years before his soul jazz groove firmly kicked in! The "hi fi" is a bit overstated – as the album's pretty much of a straight jazz record, featuring Cannon blowing lead solos in a large group arranged and directed by Ernie Wilkins. Bother Nat's on cornet, and other players include Jerome Richardson, Junior Mance, and Jimmy Cleveland. Titles include "Junior's Tune", "Blues For Bohemia", "Dog My Cats", "T's Tune", and "Casa De Marcel".  © 1996-2021, Dusty Groove, Inc.
(Blue label drummer logo pressing with deep groove! Note: Side 1 has some oxidation, and plays with some light crackles. Side 2 is fine. Cover has some aging on the back, but the front looks great.)

Music For Swinging Moderns
EmArcy, 1956. Very Good
LP...$28.99
One of the few albums ever recorded by one of our favorite alto players of the 50s! Dick Johnson is a real lost talent – a sharp-edge player who came from the same Boston scene as Charlie Mariano, and who had a similarly soulful approach! His tone is as sharp as that of Lee Konitz, but he ... LP, Vinyl record album

Mainstream Of Jazz
EmArcy, 1956. Very Good-
LP...$6.99
Gerry Mulligan's still far from the mainstream of jazz on this sweet little set – a great date that expands nicely from the mellower styles of the Pacific Jazz years – expanding the group a bit, with some really great results! In addition to Mulligan's usual baritone sax, Gerry also ... LP, Vinyl record album

Terry Gibbs
EmArcy, 1955. Very Good-
LP...$7.99
Excellent small group work from vibist Terry Gibbs – just the kind of set that shows why he was one of the best known players on his instrument in the 50s! Gibbs has a clear, clean style here that's never too laidback, nor too prone to over-done flourishes – a style that was born in ... LP, Vinyl record album

FYI (10-inch)
EmArcy, Early 50s. Very Good-
LP...$14.99
Proof that Charlie Ventura was one of the hippest talents on the tenor of his generation – a sharp-edged batch of tunes that hang perfectly between bop and swing, played with some very cool touches! The lineup features Bill Harris on trombone, Charlie Shavers on trumpet, and Ralph Burns on ... LP, Vinyl record album