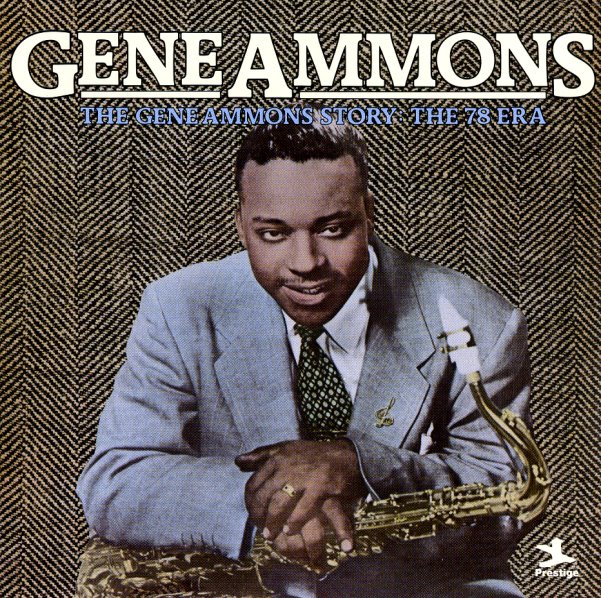 An excellent overview of Ammons' early years at Prestige – back when he was recording mostly 78s for the label, and king of the jukebox scene! The sides vary between bop, swing, and a bit of rougher R&B styled tunes – and players include Sonny Stitt, Duke Jordan, Benny Green, Bill Massey, Matthew Gee, and Junior Mance. The feel of the material is similar to Ammons' sides for Chess at the time, but a bit tighter overall – and the set includes 30 tracks in all. Titles include "Back In Your Own Backyard", "Easy Glide", "Walkin", "Chabootie", "Bye Bye", "Archie", "Ammons Boogie", "Jug", "Wow", "Blue & Sentimental", "When I Dream Of You", "A Lover Is Blue", and "Sock".  © 1996-2023, Dusty Groove, Inc.
(A nice copy!)

Gene Ammons Story – The Organ Combos
Prestige, 1960s. Very Good+ 2LP Gatefold
LP...$7.99
Our favorite side of Gene Ammons' talents – summed up nicely in a 2LP set! Ammons wasn't the first tenor player to work with a Hammond organ, but once the format gained popularity, Gene made a wise move to take it up – and it became a pairing that forever defined the later years of his ... LP, Vinyl record album

Hi Fidelity Jam Session (aka Happy Blues)
Prestige, Late 50s. Very Good
LP...$39.99
Gene Ammons in a mighty nice setting – working here in an open-ended jam session style that brings all his best live energy into play at the studio of Rudy Van Gelder! The set's got a crackle that really goes beyond the earlier, shorter bop recordings from Ammons – and a bit more ... LP, Vinyl record album

Swinging The Jugg
Roots, Late 60s/1976. Near Mint-
LP...$6.99
A very nice set of tracks released after Gene Ammons' death – but probably recorded at some point in the early 60s, given the sound of the session. Jug's playing with a groovy little organ combo (players uncredited), and the feel of the material is nice laidback and lougey. There's a tasty ... LP, Vinyl record album