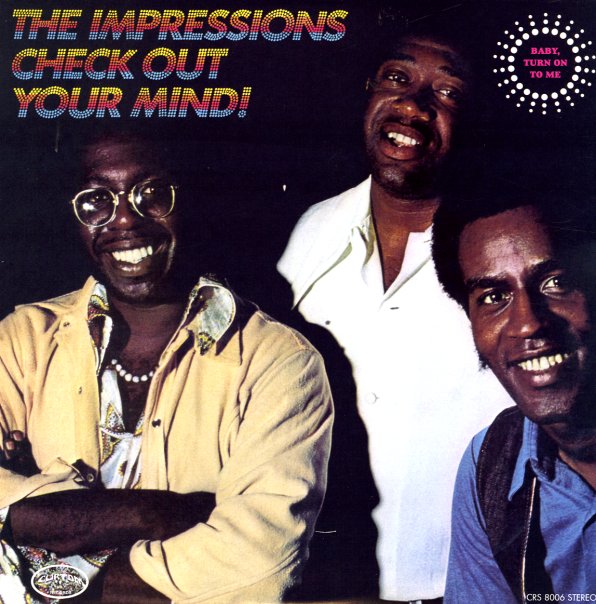 Check Out Your Mind

Righteous late 60s soul from The Impressions – the group's last album with Curtis Mayfield in the lineup! The sound here follows heavily from the Young Mods and This Is My Country years – a heavier take on the trio's soul stylings than their work over at ABC in the mid 60s – pushed into more heady political territory, yet still informed with an unmatched approach to harmony soul. Arrangements are by Riley Hampton and Gary Slabo, and they've got some great psychedelic soul touches that are a perfect precursor to Curtis Mayfield's solo work to follow on Curtom – a great groove that steps out wonderfully with an undercurrent of funk in the mix. Henry Gibson plays some great congas on the set – again hinting at the Mayfield sound to come – and titles include "Check Out Your Mind", "Madam Mary", "We Must Be In Love", "Only You", "Say You Love Me", "Turn On To Me", "Do You Wanna Win", and "You're Really Something Sadie".  © 1996-2021, Dusty Groove, Inc.
(Original pressing. Cover has a small cutout mark and some light wear.)

Bittersweet Stories
Curtom, 1974. Near Mint-
LP...$3.99
A very strange release on Curtom – and we're not sure if we should call it a rock album or a soul album! Bobby Whiteside produced and arranged, and he's got sort of a 70's AM radio sound, with lots of pop harmonies, and catchy overproduced hooks. Titles include "Pen Of A Poet", ... LP, Vinyl record album