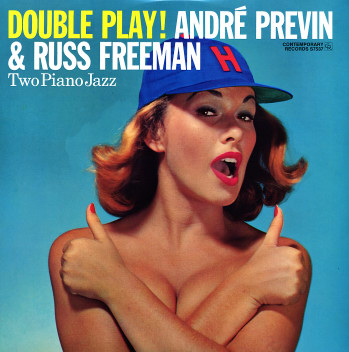 A goofy title and cover – but a really unique session of two-piano jazz, recorded with Russ Freeman and Andre Previn on the keys, plus only the drums of Shelly Manne to provide additional support! The sound is really great – and Previn's especially wonderful here, really stretching out to meet the harder style of Freeman. Both players also seem really inspired by Manne's drum work – and in a way, it almost feels like Shelly's directing the piano from the drum kit, especially on the more uptempo numbers. The notes do a very detailed job of breaking down the piano work, so that you can figure out who's soloing when – and titles include "Who's On First", "In The Cellar Blues", "Called On Account Of Rain", "Fungo", "Safe At Home", and "Double Play". Baseball, anyone?  © 1996-2021, Dusty Groove, Inc.

Byrd At The Gate
Riverside/OJC, 1963. Used
CD...$9.99
Byrd's trio gets some great help here from Clark Terry on trumpet and Seldon Powell on tenor – in tracks that include "More", "Ela Me Deixou", "Broadway", "Some Other Spring", and "Shiny Stockings". CD

First Light
CTI, 1972. Used
CD...$1.99
Sweet early CTI work from trumpeter Freddie Hubbard – the kind of groundbreaking electric jazz that really helped him find a new space in the 70s! The album follows strongly from Freddie's classic Red Clay set for CTI – and like that one, it features extended tracks that build ... CD