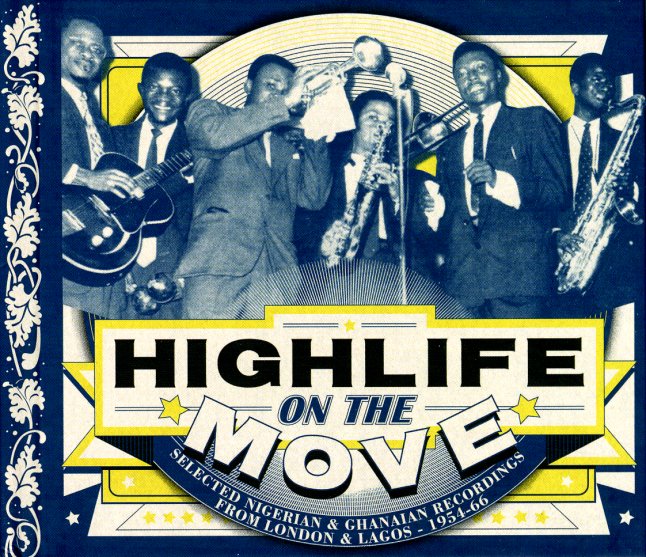 An amazing set on Soundway that not only captures Highlife On The Move from the early 50s to mid 60s, it's essentially the roots of the music and dancefloor culture of some of greatest Ghanaian and Nigerian grooves to come! The historical relevance of the material is monumental to say the least – not only showing the diverse impact of calypso, mambo and jazz music that was being combined in the nascent-to-prime years of highlife, from Lagos to London – but it also includes what's thought to be the first ever recordings by Fela Kuti, with his Highlife Rakers combo. It's compiled by Markus Coester, who also penned the thick, insightful booklet, and true to Soundway tradition, it's impeccably packaged, and the sound quality is pristine as can be. 38 tracks in all, with "Highlife No 5" by Ginger Folorunso Johnson & His Afro-Cuban Band, "Son Of Africa" by Kwamalah Quaye Sextetto Africana, "Niger Mambo" by Bobby Benson & His Combo, "Afro Mood" by Chris Ajilo & His Cubanos, "Obaa Amponsa Pandogo" by Black Star Band, "Donaldo's Samba" by Afro Rhythm Kings, "Marabi Dance" by Afro Rhythm Kings, "Maggie" by Jhn Santos Martins & Zeal Onya & His Band, "Ghana, Forward Forever" by Lord Ganda & Rupert Nurse's Calypso Band, "Highlife Comes To Europe" by Rans Boi's African Highlife Band, "Uwa D' Arejere" by West African Rhythm Brothers, "Eyo Mano Mi" by T Odueso's Akesan Highlifers, "Wa Sise" by Willie Payne & The Starlite Tempos, "Anyin Gan Na" by Victor Ola-Iya & His Cool Cats and more – plus "Fela's Special" and "Aigana" by Fela Ransome-Kuti & His Highlife Rakers.  © 1996-2021, Dusty Groove, Inc.