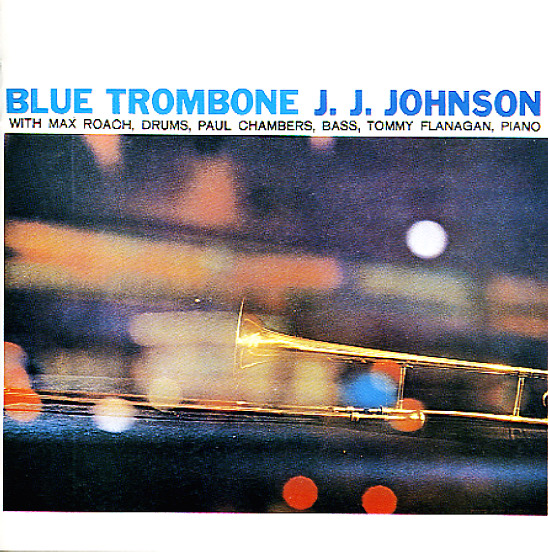 A great small group session from trombonist JJ Johnson – a record that sets him up with a crack rhythm section, then really lets him open up on his solos! The approach is a great change from some of the more tightly arranged Johnson albums for Columbia – and is a great reminder of the sharp, soulful hardbop style that first made folks take note of JJ during his early work for Blue Note and Prestige Records! The set cooks nicely – thanks to piano from Tommy Flanagan, bass from Paul Chambers, and drums from Max Roach – and titles include "Kev", "Blue Trombone (parts 1 & 2)", "100 Proof", and "What's New".  © 1996-2022, Dusty Groove, Inc.
(Mono 6 eye pressing with deep groove. Cover has light wear and aging.)

Concepts In Blue
Pablo, 1981. Near Mint-
LP...$9.99
A slightly larger group, which gives Johnson a chance to show off his arranging skills – but a set that also leaves plenty of room for solos too! Features JJ Johnson on trombone, Clark Terry on trumpet, Ernie Watts on tenor and alto, and Pete Jolly and Billy Childs on keyboards! LP, Vinyl record album

Trombone & Voices
Columbia, 1960. Near Mint-
LP...$9.99 14.99
A surprisingly wonderful album – one that pits JJ's trombone against a wash of voices conducted by Frank DeVol! The vocal group's a relatively small one, and they sing in a nice breezy jazzy style on most cuts – hipper than usual for DeVol, with a swinging style that mixes male and ... LP, Vinyl record album

Birds Of Fire
Columbia, 1972. Near Mint-
LP...$34.99
A great second album from Mahavishnu Orchestra – one that has them still very might in the same tight formation as the first! As before, there's a heck of a lot of power here – monstrous work on drums from Billy Cobham, sharp-edged guitar from John McLaughlin, and a range of great ... LP, Vinyl record album

Free Lancing
Columbia, 1981. Very Good+
LP...$7.99
A major label set, but one that stays very true to the new ideals that James Blood Ulmer was trying to bring to jazz guitar at the time – a really revolutionary style that moves beyond simple genre conventions, and embraces a whole world of new ideas that would inspire others in the decade to ... LP, Vinyl record album

Wynton Marsalis
Columbia, 1982. Sealed
LP...$13.99
The classic debut of a young Wynton Marsalis – cut after a stretch when Wynton was working with Art Blakey, and had really sharpened his chops! The record's a wonderful return to straight jazz tradition for Columbia – but it also has some modern moments too – proof that the ... LP, Vinyl record album

Group 87
Columbia, 1980. Very Good+
LP...$4.99
The only album ever recorded by Group 87 – a talented trio who were maybe a few years ahead of their time! Although a fusion record at the core, the sound here is often melodic in a catchy instrumental way that reminds us a bit of some of the more interesting Japanese pop instrumentals of ... LP, Vinyl record album