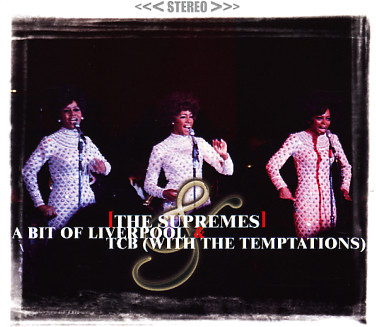 Bit Of Liverpool/TCB (with the Temptations)

2 odder Supremes albums on one CD! A Bit Of Liverpool is a strange set in which The Supremes strangely sing hits of the British Invasion – like "How Do You Do It", "You Can't Do That", "House Of The Rising Sun", and "I Want To Hold Your Hand" – nearly all of which are done in fairly rock-heavy versions that sound nothing like the group's bigger soul hits of the time. It's hard to imagine that such an album would appeal to either the group's regular fans or those who liked true British rock, but perhaps that's also why the record features a version of The Contours "Do You Love Me" and The Miracles' "You've Really Got A Hold Of Me" who are also listed in the notes as being part of the "male group" phenomenon that is really what the Brit invasion was about. TCB is a soundtrack to a film that starred the group, with some guest appearances by The Temptations – in Motown-show versions of tracks that often feature the singers lapsing into medleys of other tunes, or doing some popular hits of the day. Titles include "Respect", "Somewhere", "Stop In The Name Of Love", "TCB", "For Once In My Life", "Hello Young Lovers", "I Hear A Symphony", and "The Impossible Dream".  © 1996-2021, Dusty Groove, Inc.
(Out of print.)