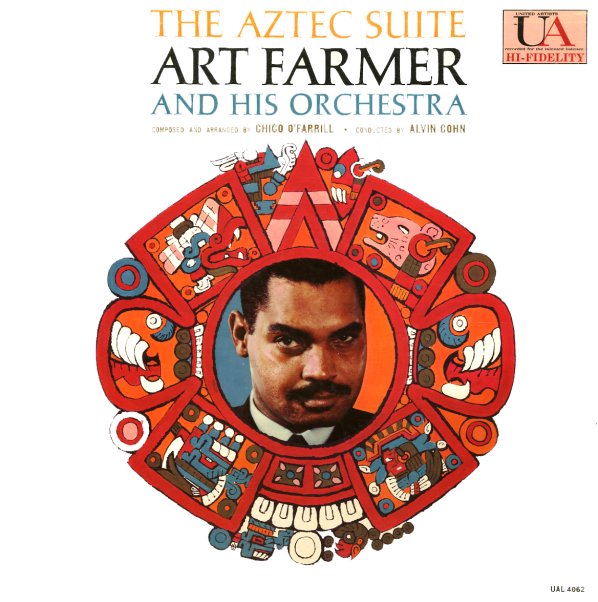 A rare Latin outing from trumpeter Art Farmer – one that has him working with the mighty Cuban arranger Chico O'Farrill! The grooves here are hardly "Aztec", as Chico brings a hip postwar vibe to the session – a blend of American jazz and Latin rhythms that's totally great, and played by an all-star array of players conducted by Al Cohn! Side one of the record features the extended "Aztec Suite" – an ambitious number that begins with modern moments that are somewhere in a space between Stan Kenton and Ralph Burns' experiments of this nature, but which always has Farmer's trumpet as the center focus. Side two features tracks that are a bit more conventional Latin jazz – still played by the bigger group, but with an even stronger sense of swing! Titles include "Aztec Suite", "Heat Wave", "Drume Negrita", "Alone Together", "Woody N You", and "Delirio".  © 1996-2022, Dusty Groove, Inc.
(Mono red label pressing with deep groove. Cover has heavy edge wear, half split seams, some splitting in the spine, and a number of smudges in front and back.)

Something You Got
CTI, 1977. Very Good+ Gatefold
LP...$9.99 11.99
A sweet funky album from Art Farmer– an artist we don't normally associate with 70s funk, but who does a really great job on this CTI session! Art's working here in the frontline with Yusef Lateef on reeds – another unlikely candidate for a record like this – and the pair get ... LP, Vinyl record album

Brass Shout
United Artists, 1959. Sealed
LP...$38.99
A great little album by this wonderful trumpeter – and one that we passed up for years because we were afraid of the words "brass" and "shout" in the title! If you're a Farmer fan, though, don't worry about this being some sort of snoozy "bold n brassy" session ... LP, Vinyl record album

Paris Blues – Original Soundtrack
United Artists, 1961. Very Good+
LP...$11.99
We've always loved Duke Ellington's soundtracks, and this is one of his best! The score is a moody introspective one, written for a 1961 film that starred Paul Newman as a frustrated jazz musician living in Paris. The "Paris Blues" theme is a dark, somber composition that is supposedly ... LP, Vinyl record album

Dream Come True
United Artists, 1980. Near Mint-
LP...$4.99
Warm guitar magic from Earl Klugh – exactly the kind of record that helped cement his fame at the start of the 80s – making Klugh one of the leading guitarists of his time! The style's often a bit mellow, but never in a sleepy way – just a great extension of the mode that Earl ... LP, Vinyl record album

Coltrane Time
United Artists, 1958. Very Good+
LP...$49.99
This is a repackaged version of an album that was originally issued under Cecil Taylor's name, under the title Hard Drive (and later Stereo Drive, or something like that). The record brings together two of the late 50's most promising modernists – Cecil Taylor and John Coltrane – in a ... LP, Vinyl record album

Jazz Soul Of Porgy & Bess (2nd cover)
United Artists, 1959. Very Good+ Gatefold
LP...$11.99
A stone cooker – and one of the best versions of Porgy & Bess recorded in a jazz format! It's a slightly-forgotten fact that at the time of the big late 50s film version of Porgy & Bess, there was a bit of trouble with the soundtrack – so the market was flooded with other ... LP, Vinyl record album

Music From Odds Against Tomorrow
United Artists, 1959. Near Mint-
LP...$19.99
A brilliant album through and through – not just a standout from the late 50s years of the Modern Jazz Quartet, but also a compelling soundtrack composed entirely by pianist John Lewis! Lewis' writing was always a key part of the group's sound, but here it really comes into its own – ... LP, Vinyl record album

Going To The Movies
United Artists, 1962. Near Mint-
LP...$19.99
Wonderful stuff – a rare LP from the early 60's that has master reedman Jerome Richardson running through hip versions of hip tracks from hip (and not-so-hip) movies! Includes nice long versions of "Delilah" and "No Problem" (from Les Liasons Dangereuses), plus "Never ... LP, Vinyl record album

Three Blind Mice (UA pressing)
United Artists, 1962. Very Good-
LP...$39.99
A really unusual live set from the great Art Blakey – his only album for the United Artists label, but one that continues the tradition of the expanded group style he was starting to use at Blue Note! The lineup here is a sextet, one that's got even more power than the Jazz Messengers as a ... LP, Vinyl record album