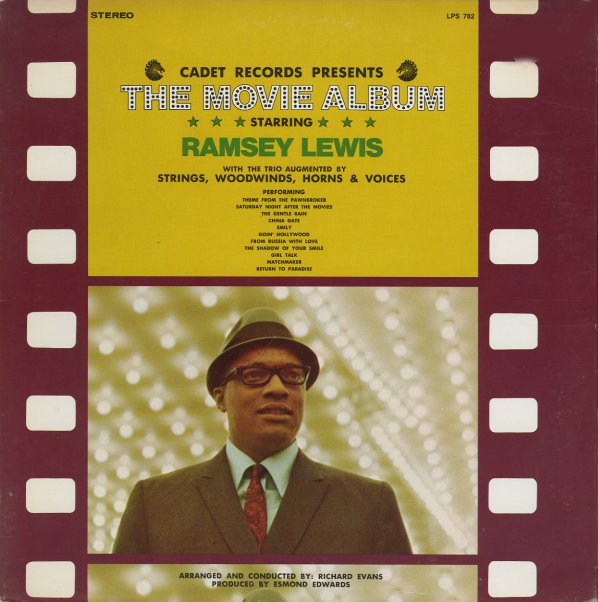 Jazzy and classy – and one of the first of Ramsey's albums to feature him working with larger arrangements instead of the usual trio. In this case, the whole thing was arranged and conducted by Richard Evans – with a spacey hip sound that's not too far from some of Ramsey's later work for Cadet with Charles Stepney. Evans' arrangements are in that strident stepping Soulful Strings mode – and Ramsey's working the keys hard and soulfully over the top, bouncing around the piano in a hard mode that wipes away any schmaltz that you might have caught on the records otherwise. The whole thing grooves quite nicely in a mix of spacey jazz and easy soul – and titles include "The Pawnbroker", "Saturday Night After The Movies", "Girl Talk", "Matchmaker", "Return To Paradise", "Goin Hollywood", "From Russia With Love", and "The Gentle Rain".  © 1996-2021, Dusty Groove, Inc.
(Blue fade label stereo pressing with deep groove. Cover has some ring & edge wear, a round sticker spot on front, and small drillhole through the center. Labels have a small drillhole.)

Inter-Action
Cadet, 1965. Very Good
LP...$2.99
A nice little set by Sonny Stitt and Zoot Sims – recorded in Chicago after the two had played together at the Plugged Nickel in the Windy City! Backing is by the trio of pianist John Young – who gives the album a rolling bottom groove that shows off the Chicago sound of the early 60s ... LP, Vinyl record album