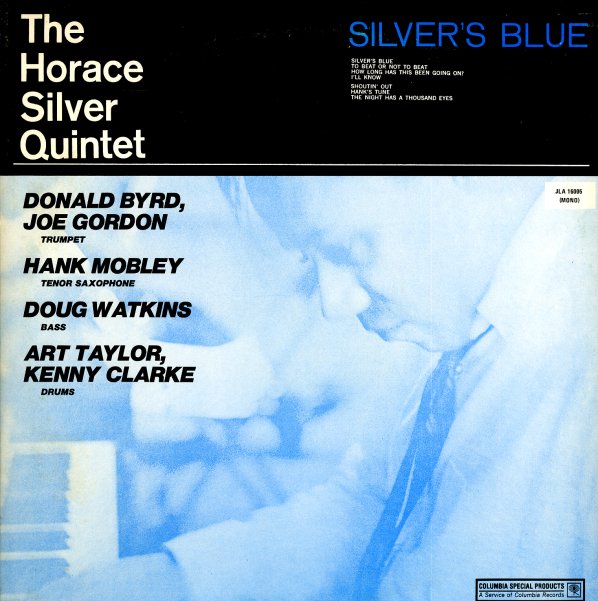 Killer early work from Horace Silver – and a rare non-Blue Note session from the 50s! The album's Horace's only date for Columbia, and it's got a feel that's similar to some of the Jazz Messengers' hardbop recordings for the label at the time – cooking with a soulful intensity at the bottom, yet taking off with some tremendously well-carved solos on the top! The group's an all-star ensemble that includes some of the best harbop players of the time – Hank Mobley on tenor sax, Donald Byrd and Joe Gordon on trumpet, Doug Watkins on bass, and Kenny Clarke and Art Taylor on drums – all grooving together with Horace as if they'd been backing him up for years. Titles include great originals "Silver's Beat", "Shoutin' Out", and "Hank's Tune – plus versions of "I'll Know" and "The Night Has A Thousand Eyes".  © 1996-2023, Dusty Groove, Inc.

Silver 'N Voices
Blue Note, 1977. Very Good+
LP...$11.99
A beautiful, beautiful record from Horace Silver – one of his great 70s experiments for Blue Note – and a set that has him working in the same "jazz with voices" mode explored by Max Roach and Donald Byrd in earlier years! The core of the set is focused around the great work ... LP, Vinyl record album

Serenade To A Soul Sister
Blue Note, 1968. Near Mint- Gatefold
LP...$59.99 (CD...$11.99)
The quintessential sound of late 60s Horace Silver – on one hand still very much in the Blue Note soul jazz groove that earned him plenty of jukebox single play, but on the other hand really stretching out with a style that's a bit more righteous than before! Horace shows that he can still ... LP, Vinyl record album

Song For My Father
Blue Note, 1963. Very Good
LP...$59.99
An incredible record – the kind of album that only Blue Note could put out, and an instant classic that will sound wonderful forever! The album's truly one of the great ones – one of those Blue Notes that still makes you stop and pause when you hear it, even though you've heard it a ... LP, Vinyl record album

Quintet
Columbia, 1977. Near Mint- 2LP Gatefold
LP...$9.99
A classic album of soulful hardbop from the mid 70s – one that features the classic VSOP group with Herbie Hancock on piano, Freddie Hubbard on trumpet, Wayne Shorter on tenor, Ron Carter on bass, and Tony Williams on drums – all nicely returned to the acoustic splendor of their early ... LP, Vinyl record album

Ellington At Newport
Columbia, 1956. Near Mint-
LP...$14.99
One of the first albums to ever issue recordings made at the Newport Jazz Festival – quite a big hit, and the beginning of a real trend in jazz! The set's also some great work by Duke – free to perform in a setting that's not bound by some of the time restrictions of earlier years, ... LP, Vinyl record album