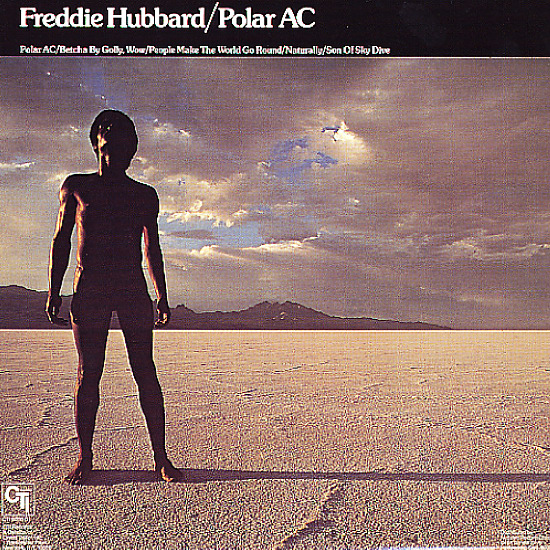 Warm and wonderful work from Freddie Hubbard – a killer of an album recorded for CTI, and one of his most soulful efforts for the label! The album's got a bit more of a human heart than some of the more cosmic sessions Freddie cut at the time – a bit more contemplative and introspective, but no less open-minded and electrically charged. The assortment of players is all top-shelf – with Billy Cobham, Airto, Lennie White, George Cables, Hubert Laws, and George Benson all backing Freddie up on the set – and titles include a great take on "People Make the World Go Round", plus "Naturally", and "Son of Sky Dive", which grooves just like its papa!  © 1996-2022, Dusty Groove, Inc.
(Cover has a small spot of gloss separation at the top corner, but is in great shape overall!)

Born To Be Blue
Pablo, 1982. Near Mint-
LP...$14.99
A beautiful set from Freddie Hubbard – part of his move back to straighter, more long-form jazz at the start of the 80s! The set's still got some keyboards in the mix, but it's also got a soaring, searching, soulful groove that reminds us a lot of Hubbard's best late 60s moments for Atlantic ... LP, Vinyl record album

Night Of The Cookers Vol 2
Blue Note, 1965. Very Good+
LP...$34.99
A landmark set for Blue Note – one that features Freddie Hubbard working in raw, firey, freewheeling territory – given space that few other players at the label were getting at the time! The two volume set features tracks recorded live at Club La Marchal in Brooklyn – and have ... LP, Vinyl record album