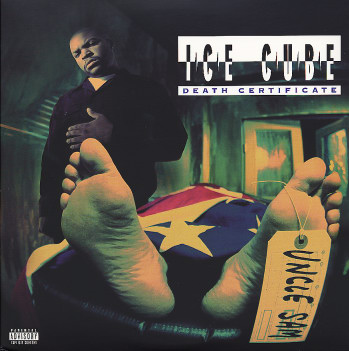 Cube's anger goes full throttle on his second post NWA full-length. He takes every aspect of his social commentator standpoints to another level from his solo debut – the roles of the angry and educated leader, and the finger-pointing blamer each get their say here, and so do those furiously funky Lench Mob beats. One of the last great gangsta era records to be so propulsive and exciting – Dre's Chronic was waiting just around the corner to haze this sound out of the picture for good. Quite tough to find on wax in it's original pressing – and the titles include include "Givin Up The Nappy Dug Out", "The Funeral", "Wrong Ni**a To –- Wit", "My Summer Vacation", and "Steady Mobbin".  © 1996-2021, Dusty Groove, Inc.
(Top notch 2015 pressing – with a 3D lenticular cover!)

NWA & The Posse
Ruthless/Priority, 1987. New Copy (reissue)
LP...$23.99 25.99
Nice early Ruthless compilation, issued on Macola in '87, and a year later on Priority with a slightly altered tracklist – featuring NWA and other affilated members of the Ruthless stable at the time – with tracks by NWA, solo Eazy-E and Fila Fresh Crew featuring DOC! A genuine ... LP, Vinyl record album