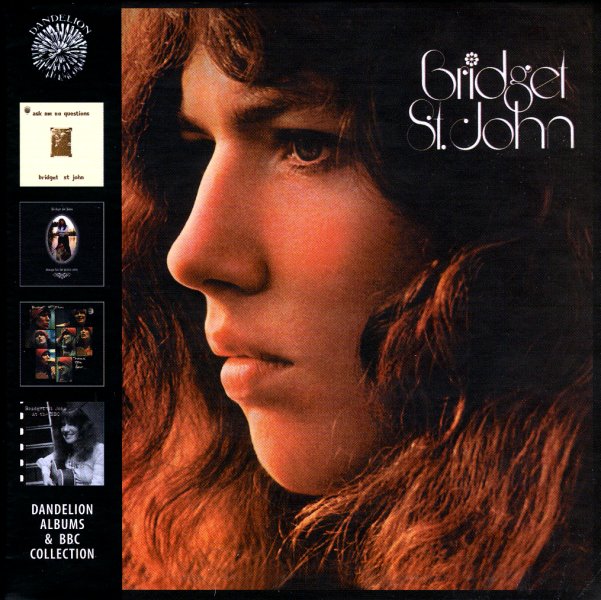 A massive collection of work from the legendary Bridget St John – a singer who just seems to get better and better the more we listen to her music! First up is the album Ask Me No Questions – a set with the same spare, chilling quality as Nico's first album on Verve! Like Nico, Bridget is amazingly without categorization – a folksinger initially, but one who's working here with a darkly personal quality that goes far beyond most folk work of the 60s! There's almost a Leonard Cohen-like quality to the tracks here – as they're little song-paintings in words that accomplish a tremendous amount with very little – evocative portraits and landscapes that need little more than Bridget's voice and guitar to carry them off. Titles include "Autumn Lullaby", "Like Never Before", "Barefeet & Hot Pavement", "I Like To Be With You In The Sun", "Many Happy Returns", and "Ask Me No Questions". Next is Songs For The Gentle Man – a slightly more expanded version of the sound explored on her debut! Bridget's still very much in a folk-inspired sound here – but like the work of Nick Drake and some of her contemporaries on the British scene, this album has jazzier phrasings and some slightly baroque touches on some tunes – really deepening the feel of the songs, and giving the album a dark depth that we'd easily compare with some of Drake's greatest work. Studio genius Ron Geesin produced the set with a surprising degree of subtlety – just the right amount of edgey undercurrents to unsettle the tunes nicely – never threatening Bridget's presence on the album, but augmenting the moody spectrums that already came across so nicely on the first record. Titles include "A Day A Way", "City Crazy", "Back To Stay", "Seagull Sunday", "If You'd Been There", "Song For The Laird Of Connaught Hall (part 2)", "It Seems Very Strange", and a version of Donovan's "The Pebble & The Man". Next is Thank You For – a slight shift in styles for British singer/songwriter Bridget St John – an album that shakes off a few of the folksy touches of earlier years, but still retains all the dark corners that make her work so great! A few tracks on the album have Bridget working with more traditional accompaniment, but overall most of the record still focuses strongly on voice and guitar – augmented slightly by additional instrumentation that's used sparingly, but beautifully. Most of the tracks here are still by St John – including "Nice", "Thank You For", "Happy Day", and "To Leave Your Cover" – but the album also features a few covers, like Buddy Holly's "Every Day" and Dylan's "Love Minus Zero No Limit". And the final CD features BBC recordings from 1968 to 1972 – including performances for Nite Ride, Top Gear, Peter Sarstedt, Bob Harris, and In Concert.  © 1996-2022, Dusty Groove, Inc.